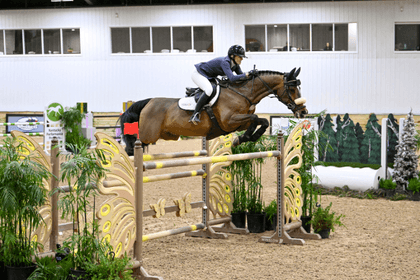 Wilmington, Ohio – The Sanctuary Arena played host to eighteen elite horse-and-athlete pairs Saturday evening of Winter Classic #2 at World Equestrian Center – Wilmington for the $30,000 WEC – Wilmington Grand Prix. Guilherme Jorge (BRA) set a complex first round track with just nine returning for the jump-off in hopes of securing the win. At the conclusion of the thrilling class, the crowd recognized Darby Pease and Carel Van Donderen as they secured a second $30,000 WEC – Wilmington Grand Prix victory.

Pease, training with Teri Knowlton out of Windcrest Farm, was nothing short of spectacular in tonight’s class. The pair continues to etch their name in history as the grow stronger with each step in the ring. The young aspiring professional acquires top ribbons aboard many talented horses, but none are as special as her beloved Carel Van Donderen (Acolino x Terania De Hoeghte).

Returning for the jump-off, Pease played to her horse’s strength: speed. The 15-year-old Dutch Warmblood gelding owned by Lousia Robb is impressively quick across the ground, with the ability to leave strides out in the unrelated lines and balance at the base to leave the rails intact.

“My plan was to leave strides out where I could and be as fast as I could in the turns. I didn’t want to leave any room for error, I wanted the rest of the class to have to chase me,” Pease comments on her jump-off. The duo stuck to their plan and crossed through the timers in 39.368 seconds to add another win to their record.

Pease took on the class with unwavering support behind her. Her trainer Teri Knowlton, as well as Tom and Hillary Gromus. “Nobody works harder than this girl does. It has been so crazy to watch her journey with all these horses because she never gives up. The first win is luck, the second one is real,” comments Knowlton.

Sitting in a close second place, another duo that is familiar with the winner’s circle at WEC, Richard Rinehart and Vincent (Van Gogh x Nirande). The 10-year-old Dutch Warmblood gelding was in perfect form, jumping two clear rounds right on Pease’s heels. Rinehart of Rinehart Farm in Westfield, Indiana, entered the arena looking to best the winning time. One extra stride in the first turn kept him from the blue ribbon, finishing in 39.641 seconds to earn the red ribbon.

Izzy Beisel and her very own Diaz Barbotiere rounded out the podium. The decorated junior rider did not shy away from the technicality of the track, riding her 9-year-old Selle Francais gelding perfectly to the base of each jump. Beisel, training out of David Beisel Stables in Goshen, Ohio, fearlessly entered the arena for the jump off immediately stepping on the gas pedal. Ultimately, the duo crossed through the timers in 39.876 putting them in third place.

WEC – Wilmington sponsor Vitalize presented the Blazin’ Fastest Four Faulter $1,000 bonus in the $30,000 WEC Grand Prix to Richard Rinehart and Light Show, who earned 66.919 seconds in the first round, finishing tenth in the class overall.

Earlier in the afternoon, a talented field of athletes met in the Sanctuary for the $10,000 Triple Crown Futures Prix to set the tone for Saturday evenings feature competition. A total of 24 combinations made way around Guilherme Jorge’s (BRA) winding course that asked athletes to keep perfect track of their horse’s stride. Of the seven horse-and-athlete pairs that advanced the jump-off, none could best Leann Kelly and Graf Joe, who earned their second consecutive futures prix win of the series.

Kelly, of Winslow Farm in Valencia, New York, showcased the incredible talent of her mount, Graf Joe (Graf Top x Aline), leaving the crowd awe-inspired of the horse’s remarkable scope and stride. The duo made light work of the challenging first round track, earning them a spot in the immediate jump-off phase.

“He [Graf Joe] is a really cool horse. We bought him as a 6-year-old and did him through all the young jumper competition. We have had him for quite a few years now and I think he is just hitting his prime.”

Moving into the jump-off phase, Kelly was looking to top the leaderboard for the second week in a row. The 13-year-old Hanoverian gelding made neat turns and galloped down to the last fence, though, like many in the jump-off, he did not lose his form and left the final rail intact in a blazing fast 40.079 seconds to take the win.

“He is a really fast horse; you can trust him to gallop down to the skinny and leave it up. Everyone else was on a very comparable track, but I was able to run home and trust that he would leave it up,” Kelly remarks on her jump-off track.

Sitting behind in a close second place was Kama Godek of Fairfax Station, Virgina, and one of her many mounts this week, Stonehenge 5 (Stolzenberg x Karlotta). The 11-year-old Hanoverian gelding was quick and careful in both phases of competition; however, he did not have quite the stride to knock Kelly off the top spot. The duo galloped through the timers in 41.176 seconds to secure their red ribbon.

Drew Arnold of Carmel, Indiana, and Theresa Kraft’s Chaccomo 11 (Chacco Blue x Sacenta) returned to the Sanctuary for the second week in a row, looking to best their last performance. As the third to go in the order and the first to jump a double clear effort, Arnold held a solid lead until Kelly stepped in on her trusted mount. The 13-year-old Mecklenburg gelding carried Arnold to an effortless clear ride in a time of 44.2 seconds to round out the podium.