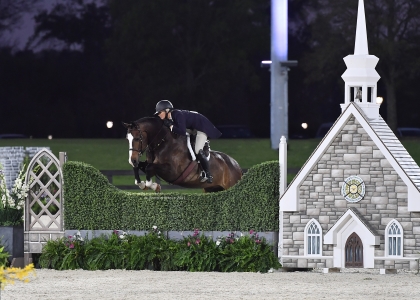 Glynn and the 12-year-old Irish Sport Horse gelding yielded an impeccable first round, jumping each high option with ease to earn the class’s highest first round score of 95.

Financier is brand new to Glynn, “Yesterday, was my first-time riding Financier. The family that owns him are from Texas and they have become good friends of mine. They invited me to come to Ocala to ride and I explained that I would really love to because WEC Ocala is such a magical place. I was so excited because this is the best facility in the country, if not the world.”

Glynn and Financier were the last pair to return for the handy, “I knew Dorrie [Douglas] is the handiest person on the planet. So, I knew I wasn’t going to be able to take the track that she did, because she does inside turns that no other human could accomplish,” laughed Glynn. “I was hoping to use my horse’s brilliant style and jump to stay on top, and he jumped his heart out for me.”

Glynn and Financier yielded a gorgeous handy round to earn a score of 92 from the judges, for a two-round total of 187.

“My very best friend Amanda Steege was supposed to be in this class today, but she had a fall earlier in the day and could not compete. It wasn’t the same class without her in it, but I know she would have been cheering me on. I pulled out a win for her,” said Glynn.

The $15,000 WEC Ocala 3’ Open Hunter Derby saw a star-studded field of 34 entries, but it was Timothy Maddrix and Missy Roebuck Nolen’s Cypress that earned two scores in the 90s for first place.

Maddrix and Cypress managed the first course with ease, to earn the class’s highest first round score of 92.

“The course was a fitness test. I liked the options that they offered in the first round, but I kept second guessing myself because I wasn’t sure if I was jumping the right jumps because the course felt so long,” laughed Maddrix.

Maddrix and the 11-year-old Warmblood gelding were the last pair to return to try their hand at the handy round, “The handy was fun. It was one track, with hard inside turns. There was an option to the trot fence, but I think most of us just went to the inside log. I don’t think it was handier one way or the other. Cypress was very good. I think he was really able to show off in the inside turn to the red brick fence.”

Maddrix and Cypress delivered a foot-perfect handy round while opting to take all four high options for a score of 92, for a total of 184.

Maddrix knows Cypress very well, “We got him as a seven-year-old, and this is probably our fifth year together. He hadn’t done the hunters when we got him, so we started him in the pre greens and he moved his way up. We also did the Conformations where we actually won at the Devon Horse Show. He was my first blue ribbon at Devon, which was pretty special. His mom, Missy does the Adult Amateurs on the weekend’s and she lets me steal him for the derbies.”

Fifty-seven stunning hunters gathered at the WEC Stadium early this morning to strive for the win over Keith Bollette’s open tracks, but it was Molly Braswell and her own Balou Label that bested the field.

Braswell and the nine-year-old Holsteiner gelding navigated an effortless first round, floating around the WEC Stadium to earn a score of 87.

Braswell really enjoyed today’s courses, “I thought the first course rode very well. Balou Label really likes the stadium; it rides very nicely even though it looks intimidating. I do well with open courses that offer a lot of singles, then I can ride off my eye, rather than focusing on numbers,” said Braswell.

Braswell decided to take a different approach for this handy track, “We have been knocking on the door for the past few derbies. Balou Label is nine, but he’s a green nine, so I have been babying him a bit. Today, we decided to pull out the stops because we are also getting ready for next week’s $75,000 3’ Jr/Am Hunter Derby. I think today was his best day yet. He has grown up immensely in the past year.”

Braswell and Balou Label tackled the handy, taking all four high options to earn a score of 86 from the judges.

Before the start of the handy round in the $15,000 WEC Ocala 3’ Jr/Am Derby, Bill Rube presented the prestigious Style of Riding Award to Sally Culhane for her classic style and her sportsmanship. The recipient serves as a role model for preserving the integrity and tradition of equestrian sport. “This award is very special to me because the recipient of this award pays it forward both in and out of the show ring,” says Rube. Culhane received an elegant duffel bag and wore a pink rose corsage on her lapel throughout the handy round to signify her achievement.