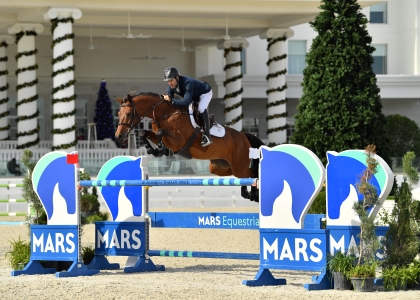 Ocala, FL – On Saturday afternoon, 24 starters representing seven different nations competed for the top prize in the $15,000 Buckeye Nutrition Futures Prix. FEI Level III course designer Catsy Cruz (MEX) built the challenging track that allowed nine to advance to the jump-off, but it was Ilan Bluman (COL) and his own Acajou (Casalco x Azobé) that posted an uncatchable time early in the order.

Bluman and Acajou were the sixth pair down the ramp into the WEC Grand Arena to attempt Cruz’s first round track. Bluman and the seven-year-old German Sport Horse mare navigated a seamless first round in 79.722 seconds to advance straight to the jump-off.

Bluman spoke about the talented young mare, “Acajou is a seven-year-old mare that I have owned for almost a year. She is getting better with each ride. She has a bit of a mare temperament and can be a little tough at times, but she is always clear. She tries her heart out in the ring and is a naturally fast horse. The plan today was to use her carefulness and speed in the jump-off.”

The pair went straight to the jump-off at the sound of the tone, “I was early in the order, but I knew there were some fast riders behind me, so I just tried to take all of the inside turns and go as fast as we could.”

Bluman and Acajou flew around the track, finding each fence on an open gallop to stop the clock at an unbeatable 42.521 seconds.

Chloe Reid (USA) and Live Oak Plantation’s Souper Shuttle (Stakkato x Luise Marie) were just behind the leading pair. Reid and the 11-year-old Hanoverian mare yielded a speedy first round well under the time allowed of 82 seconds. The pair went straight to the jump-off flying around the short track in 42.704 seconds, just two tenths of a second behind Bluman and Acajou.

Vicente Guillen (VEN) and Tranquility Farm’s Evolene De Carles (Kannan x Rafale De Carles) snagged the third-place spot on the leaderboard during Saturday’s $15,000 Buckeye Nutrition Futures Prix. Guillen and the eight-year-old Selle Francais mare produced a smooth first round in 75.606 seconds to qualify for the jump-off. The pair started on a strong gallop, delivering tight inside turns to stop the timers at 43.294 seconds which was good for third place.

The final feature class of the 2022 USEF Fall Show Series began early this morning as 21 elite horse-and-rider combinations battled for the top prize in the $10,000 1.40m Jumper Classic. Catsy Cruz (MEX) built the closing tracks that allowed eight to advance to the jump-off, but no one could catch Maya Denis and her own Jantien De Muze (Triomphe De Muze x Eejantien).

Denis and the eight-year-old KWPN gelding navigated an efficient first round in 71.383 seconds to qualify for the jump-off.

Denis spoke about the speedy gelding, “I have owned Jantien De Muze a little under a year. Our partnership wasn’t the smoothest in the beginning. We started showing last winter doing the 1.10m and 1.20m. He had jumped big classes in his past, but he wasn’t very rideable, so I went back to the basics and started all over again. Now, I would say he is one of my best horses.”

The pair went straight to the short course at the sound of the tone, “My goal was to be fluid and forward. Just recently, I have started to go forward with him, because we had to focus a lot on control. Now that I have control, I am able to go fast, but I didn’t want to run.”

Denis and Jantien De Muze rolled around the short track finding each obstacle right out of stride to stop the clock at 36.007 seconds to ultimately secure the victory.

Second place was captured by Bryn Sadler and Showcase 81, LLC’s Cinven CR (Clearway x Raissa CR). Sadler and the 14-year-old Holsteiner gelding negotiated a fast first round well under the time allowed of 77 seconds. The pair jumped-off immediately delivering a textbook round in 36.174 seconds, just one tenth of a second behind Denis and Jantien De Muze.

Vicente Guillen piloted Cornut GP (Cornet Obolensky x Baloudera) owned by Rafael Celis to third place in this morning’s $10,000 1.40m Jumper Classic. Guillen and stunning nine-year-old Oldenburg stallion found a smooth first round in 74.009 seconds. The duo advanced to the short course, taking tidy turns to stop the timers at 36.931 seconds to round out the top three.

Congratulations to all entries on a successful 2022 USEF Fall Show Series. We can’t wait to have everyone back soon for the 2023 Winter Spectacular Show Series!