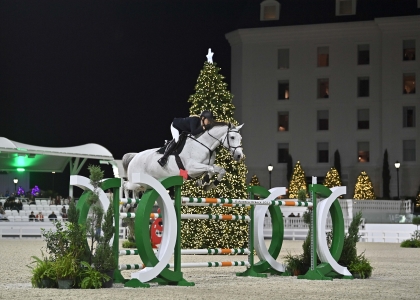 Accomplished FEI Level III course designer, Catsy Cruz (MEX) set the elaborate tracks for the 26 starters. The course proved to be challenging as only seven were able to find the path to a clear first round. The jump-off was exhilarating as each competitor chased the next, swapping out the lead numerous times.

Tom Foley (IRL) and Skara Glen’s Para Bellum were the first pair to return for the jump-off. The pair navigated a smooth round, but fell victim to one unfortunate rail. Bryn Sadler (USA) and Catch The Dollar followed, leaving all rails up in 44.488 seconds. Richard Spooner entered the arena next aboard Quirado RC. The pair dashed around the track in 40.212 seconds to slide into first.

Samuel Parot (CHI) and his own Chrystal Blue (Chacco-blue x Cherly Z) were the next pair to attempt Cruz’s short track. Parot and the 11-year-old Oldenburg gelding flew through the first three fences to bend to the green oxer in seven strides. The pair raced around the remainder of the track in 35.370 seconds, posting a time that was nearly five seconds faster than Spooner and Quirado RC.

Kristen Vanderveen (USA) and Bull Run Jumpers Six, LLC’s Bull Run’s Prince Of Peace (Cardenio x P-Comtesse) were the second to last pair to attempt to snag the lead. Vanderveen and the talented 13-year-old Holsteiner gelding found fence one on an angle to land right to fence two in eight strides. The pair rolled back in nine to gallop through the bending line in six strides. The pair dashed through the double combination to fly to the two final fences stopping the clock at 34.282 seconds to steal the lead.

Victory however was not yet sealed as Tracy Fenney entered the arena aboard the infamous MTM Apple. Fenney and MTM Apple are fresh off their win from Thursday’s $24,000 C. Jarvis Insurance Welcome Prix and they entered today’s class determined to repeat their victory.

Fenney watched her competitors as she strategized a plan, “I watched Samuel [Parot] go and he was fast. Samuel and Spooner both did seven in the bending line, then Kristen went in and did the six, but as I was walking down the ramp, I got to see most of Kristen’s ride. She did eight from one to two, then nine back to the green vertical. That’s where I knew I could be a little tighter.”

Fenney and the 11-year-old Danish Warmblood mare caught fence one on a nice slice, “I did eight and eight in the first two rollbacks. I found the bending line in the six and got to the double combination in eight strides, where Apple just curved right in and curved right out. Then I got seven back to the skinny and did ten strides home, which is crazy because it walked in 13. I even slowed down to the last fence, but we still left out three strides.”

Fenney and MTM Apple flew through the finish stopping the clock at 32.157 seconds to clinch victory.

Fenney spoke about her tried-and-true mount, “Apple is the best horse. She’s perfect and tries her heart out for me every time she steps in the ring. This was the most perfect way to end the year and start the winter off on a high note.”

An additional $5,000 was awarded to the fastest four-faulter in the $100,000 Hampton Green Farms Grand prix. Samuel Parot snagged the award aboard his other mount Captain Z after navigating a speedy first round in 72.220 seconds with one rail down.

Samantha Schaefer received the ‘Luck of the Draw’ award.