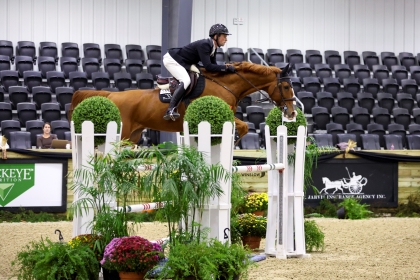 Time became a factor in the first round and only nine managed to stay within the time allowed of 80 seconds and keep all the rails up. In the jump-off it was Ireland, Brazil, Canada, United States and Belgium that battled it out for the lion’s share of the prize money.

Simon McCarthy and Andy’s Boy Bretoniere were the first pair to attempt Wade’s track, navigating a foot-perfect first round in 76.063 seconds.

“Andy’s Boy is a new partner for me. I purchased him from a good friend, Carl Hanley in Germany,” said McCarthy. “This was our third show together, and I didn’t have high expectations because I am still getting to know him, but today showed me just how brave and honest he is.”

McCarthy and the talented 12-year-old Selle Francais gelding advanced straight to the short course, “I wanted to see how he would do with the inside turns, so I planned a track that would test his rideability. Andy’s Boy did each inside easily and he was looking for the next jump after each fence.”

In unison, the pair swiftly navigated the track, taking tidy inside turns to stop the jump-off clock at an unbeatable 34.659 seconds.

“I didn’t know what Andy’s Boy was until today. I brought him up here to get to know him a bit better, and now I know he will excel in speed classes. He’s fast across the ground and over the jumps. Most horses shrink the first time they jump indoors, but he rose to the occasion,” expressed McCarthy.

Santiago Lambre (BRA) and his own Pampero (Chacco-blue x Nekton) followed, delivering an efficient round in 77.594 seconds to qualify for the jump-off. At the sound of the tone, Lambre and the 12-year-old Oldenburg gelding started on a strong gallop to fence one. The pair rolled around each turn, not touching a single rail in 34.934 seconds, just three tenths of a second behind McCarthy and Andy’s Boy Bretoniere.

Lauren Esdale (CAN) and Pauline Esdale’s Viamdios D’Avril (Diamant De Semilly x Diosavril Aa) earned third place honors. Esdale and the 13-year-old Selle Francais gelding delivered a clean first round in 78.594 seconds. The pair went on to challenge the short track, galloping around the course in 38.035 seconds to round out the top three.