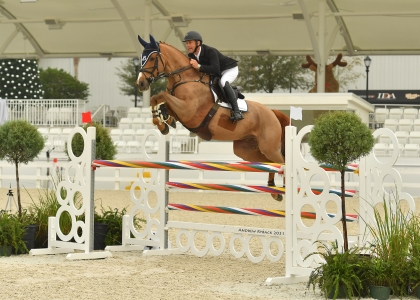 Tynan and Ballinteskin Joe were the first horse-and-rider pair to enter the class this morning, delivering a perfect first round stopping the clock at 76.889 seconds. Tynan really enjoyed today’s courses, “The courses were really nice today. It was similar to the Grand Prix from last night but reversed. So, it was really good for some of the younger horses to go in and not be under so much pressure.”

Tynan and the 10-year-old Irish Sport Horse gelding advanced straight to the jump-off rolling through the entirety of the course while taking quick inside turns to stop the clock at 32.207 seconds, a time that no other competitor could catch.

Tynan also took third place during today’s $15,000 WEC Ocala 1.40m Jumper Classic. Tynan had different plans for both horses during the jump-off, “I was sort of hoping that I would win on Fenise because he’s been super and deserves a win. He was just a little behind and Max [Ballinteskin Joe] is naturally fast. Fenise is a 18hh monster, so they are two opposite horses, so I couldn’t make one set plan for both.”

Just behind Tynan and Ballinteskin Joe was New Zealand’s Sharn Wordley and his own Mick Jagger (Chacco-Blue x Acentora). Wordley has had a successful Ocala Fall Show Series, brining home multiple top three placings. Wordley and the 13-year-old Hanoverian gelding entered the class early in the order, producing a clean and smooth first round stopping the clock at 75.430 seconds, well within the time allowed of 80 seconds. The pair jumped-off immediately, starting on a nice gallop to fence one, to seamlessly roll throughout the rest of the course stopping the jump-off clock at 32.683 seconds to earn second.

Willie Tynan and his third-place mount Fenise owned by MDM Equestrian Group, LLC (VDL Campbell x Wica Van De Hermitage) navigated a lovely first round, jumping to the stop of the standards to stop the timers at 76.711 seconds. Tynan and the 11-year-old KWPN gelding advanced straight to the jump-off easily leaving out strides in the turns and lines to stop the clock at 32.960 seconds, to round out the top three.

Tynan and the 11-year-old Dutch Warmblood mare delivered a beautiful first round, leaving all rails up to stop the clock at 64.361 seconds. “Fancy Girl is one of my best horses. I gave all my horses off two to six weeks off. So, this class was just getting her back in the ring. We purchased her when she was a five-year-old coming six-year-old, so we have had her for quite some time. She is very special to me; I jumped my first five star with her.”

Tynan and Fancy Girl (Zirocco Blue x Australia) advanced straight to the jump-off, “I didn’t expect to go as quick as I did, but with 46 entries you had to be competitive. When I saw Derek Petersen and his horse go, I knew I was going to have to be quick. Then, Marcus [Gruenthal] took a half a second off of Derek’s time. I used Fancy Girl’s step as an advantage. I did one less step on the outside line, then I did two or three less steps galloping home to the last oxer. I think that’s where I was able to capture the time.”

Second place was earned by Marcus Gruenthal and his own Infante SK. Gruenthal and Infante SK captured many top three placings during World Equestrian Center – Ocala’s Summer Series. Gruenthal and the eight-year-old Dutch Warmblood gelding routed a very quick first round stopping the clock at 62.007 seconds, well within the time allowed of 68 seconds. The pair advanced straight to the jump-off soaring through the lines while quickly leaving the ground to stop the jump-off clock at 34.796 seconds.

Derek Petersen and his own Zechariah 3:9 (Zirocco Blue x Katrina) have also had a successful Ocala Fall Show Series, taking home many top three placings in featured classes. Petersen and the scopey seven-year-old Dutch Warmblood gelding delivered a solid first round stopping the clock at 63.868 seconds. The duo advanced to the jump-off flying throughout the course producing tidy roll backs to stop the jump-off clock at 35.041 seconds, to round out the top three.

Congratulations to all riders on a very successful two weeks of equestrian sport! We hope to see everyone for the 2022 Winter Spectacular Show Series starting on January 5, 2022.