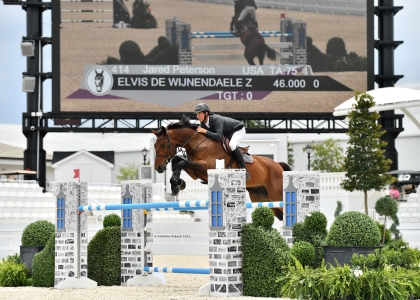 Petersen (USA) and the ten-year-old Belgian Warmblood gelding created fast and smooth first round in 70.066 seconds, well within the time allowed of 75 seconds.

Marcus Gruenthal has been working closely with Petersen, “The horse is owned by my client, Linda Bammann who is a dear supporter and a great friend. Jared and I have been working together a lot and he seems to be the perfect fit for this horse. We have a couple goals for the summer, but it has already started out great. Elvis De Wijnendaele Z is only ten, so there is a lot of horse in the tank. Overall, I am super happy with the performance of the rider and the horse,” said Gruenthal.

Petersen and Elvis De Wijnendaele Z went straight to the jump-off, “The jump-off was a lot of fun to ride. I was able to leave out strides everywhere. I walked a ten to the last fence, but I was able to slice the vertical and go down in nine easily. The horse was amazing.”

Petersen and Elvis De Wijnendaele Z soared through the timers stopping the clock at 37.032 seconds for the win.

Second place was secured by Tracy Fenney (USA) and Nina Koloseike’s MTM McIntosh (Crowntano Z x Butterfly PSZ). Fenney and MTM McIntosh were the first pair to yield a clear first round in 74.443 seconds. Fenney and the scopey eight-year-old Zangersheide stallion soared through the short course, jumping to the top of the standards of each fence to stop the jump-off clock at 39.116 seconds.

Sigma is a new mount for Goncalves, “I just brought him over from Europe. He is nine-years-old and has a lot of character. When I first got him, he was a bit too fast and green, but now he is really coming together.”

Goncalves and the nine-year-old Selle Francais gelding advanced straight to the jump-off soaring around the course to stop the clock at 39.055 seconds.

Jared Petersen and Showcase 81, LLC’s Cliff Affair snagged the second place spot in today’s $10,000 1.40m Jumper Classic. Petersen and the Holsteiner gelding yielded a smooth first round in 77.060 seconds. The pair went straight to the jump-off galloping through the course, not touching a single rail to stop the timers at 39.856 seconds.

Stefanie Collier and Fernando Comune’s Caretoo rounded out the top three in today’s class with a clear first round in 78.578 seconds and a quick jump-off in 42.100 seconds.