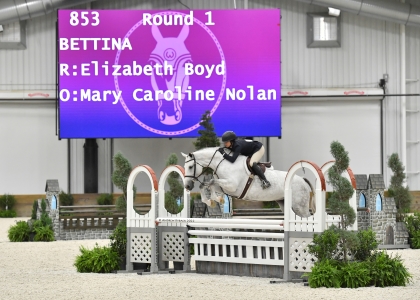 After college, I became a professional and continued to grow in the industry. I have won the USHJA International Hunter Derby Finals three times with a spectacular horse named Brunello. I was also named Overall World Champion Hunter Rider three times. I have been remarkably lucky to have had some amazing horses in my career and a great team behind me that has made my list of accomplishments possible.

WEC: What does a horse show day look like with 30 horses?

I am so lucky to have an amazing team with me including my assistant Theresa Tolar, Olivia Murray and Randi Button. With a horse show this large you must be organized, and they do an incredible job. They tell me where to go and the horses just show up. I don’t know what I would do without them!

WEC: Tell us about some of the horses that you have been competing this week.

I have been riding a bunch, but I rode an incredible First Year 3’6” horse named Bettina. She is an incredible mare owned by Mary Caroline Nolan. Mary and Bettina received Champion this week in the Junior Hunters. We are very excited for Bettina’s future.

I also have some up and coming young horses that I have been bringing along. It has been such a great opportunity for my clients and the horses to show at a venue like this. Being from the South, we barley ever show in indoors, so it is incredible to have air-conditioning, amazing footing and beautiful jumps like this in the dead of Summer.

WEC: Tell us about Elle and Adeline.

The girls are loving it here. We are staying in the RV park, and they love being able to ride their bikes around and I don’t have to worry because it is so safe here. We will definitely be back!

Thank you for taking the time to chat with us Liza! We hope you have another successful week at World Equestrian Center – Ocala.