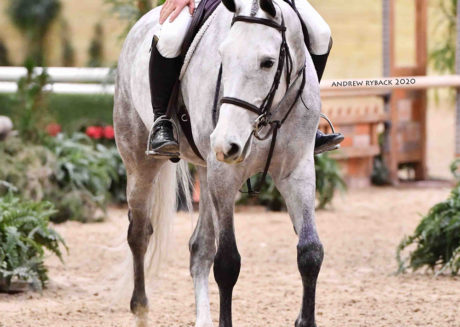 Thirty-eight stunning hunters took to the R+L Arena tonight to vie for the win in the $5,000 USHJA National Hunter Derby. The course for tonight’s class was designed by Tucker Williams of getjumps.com and emulated the hunt field with inviting fences and plentiful cedar brush. Competition was fierce with a cut-off score of 83 heading into the handy round, but it was Jason Berry who topped the class aboard hunter derby newcomer Brush’s Mill (Homerus E x I-Thake).

Shortly after, Melissa Donnelly and Elizabeth Becker’s Grand Tour tried their hand at the course. The pair earned a fourth-place finish in the $5,000 USHJA National Hunter Derby during Week 10 of ‘Winter in the Midwest’ and returned tonight in hopes of another top placing. Donnelly and the 14-year-old Warmblood gelding were flawless in the first round, taking all four high options and earning a score of 87.

Meg Howard-Fuleky also rode an impressive first round aboard Lissa Guyton’s News For You (I Am Moerhoeve’s Star x Boule De Neice IV). The pair have taken several top three placings in $5,000 USHJA National Hunter Derbies throughout ‘Winter in the Midwest’ at World Equestrian Center and were on form again tonight. Howard-Fuleky and the 8-year-old Belgian Warmblood gelding laid down a brilliant first round, taking all four high options for a score of 89.25.

Berry of Jason Berry Stables in Staunton, Virginia took a moment to chat with us ringside after the awards presentation, “Brugh is one that we imported last year. He’s an eight-year-old Pre Green horse. This is only his second AA rated show. We did a couple of local shows and brought him along, but last week and this week are his first big shows. Tonight was his first derby. The owner, Joan Alberti, is one of my oldest customers. She gave me my first A show horse when I was about 20 years old. She bought Brugh as an investment horse.”

When asked about Brugh’s Mill’s personality, Berry replied, “He’s a goofball. He doesn’t care about anything. He’s going to end up being a great amateur horse because he doesn’t spook. He doesn’t care. He has the personality to be a great junior derby horse. He’s right on the line where I thought about doing him in the first years this year, but he needs just a little bit of mileage. He’s really ready to step it up and become a good horse for someone. Next year is going to be a lot of fun.”

He also commented on his seventh place mount in the class, “Vulcan was great. He was second in the first round with a 90.5. He was phenomenal. I’ve been riding him for a few weeks now and he’s gotten very dependable. He’s a goofball just like Brugh. He’s super easy. He’s green, but he tries really hard over the jumps and he’s going to be a great horse for somebody.”

Berry also told us about a joke he shared with R+L ring starter Christine (Chris) Rheinheimer, “Chris told me before I went into the ring that I was on top, and not to screw it up. It was pretty good advice!”