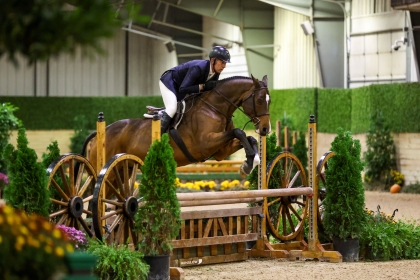 The $10,000 USHJA National 3’ Open Hunter Derby saw 16 impressive pairings compete for the lion’s share of the prize money over Murphy’s tracks, but at the end of the class it was Jeff Gogul and Roaring Brook LLC’s No Doubt (Nerrado x Abba II) that secured two scores in the 90s for an impressive overall score of 187.

Gogul and the 10-year-old Holsteiner gelding produced a seamless first round, jumping all four high options to earn a high score of 93.

Gogul spoke about No Doubt, “He’s ten going on 25,” laughed Gogul, “I don’t know if I will ever have another horse that will go in the ring and a preform the exact same each time. It only took one horse show and one derby to put it all together with him. He knows his job and does it extremely well.”

The pair returned for the handy, “I watched most of the handy rounds during the non pro derby, and I was still undecided on how I was going to approach fence one until I did the first round. Both of my horses do well off the right and I though it was a handier approach.” Gogul explained.

Gogul and the gorgeous No Doubt rolled around the handy track finding the hand gallop fence right off stride to secure a high score of 94 for an overall score of 187, more than six points higher than second place.

“We are very proud to have him, and I am lucky to be able to ride him. He fell into our laps when WEC hosted Capital Challenge a few years back. It all came from a casual conversation at the ingate and now we have this unsung hero,” said Gogul.

Twenty-five talented hunter combinations gathered at the beautifully decorated R+L Arena this afternoon to compete over a flowing track designed by Bobby Murphy (USA). Accomplished junior athlete, Skylar Wireman secured not only the first place spot on the leaderboard aboard Emily Williams’ Coastal (Chaqui Z x Gumby), but also found fourth and fifth place with her two other mounts.

Wireman and the beautifully dappled Coastal yielded a foot-by-foot perfect first round to secure the highest first round score of 92.

“Coastal is on the greener side and hasn’t shown a whole lot. I started riding him in May and this is only his second time ever competing in an indoor. His first time being last week at Harrisburg. This is also his second hunter derby ever,” said Wireman.

Wireman and the seven-year-old American Warmblood gelding were the last pair to try their hand at Murphy’s handy track, “I had a total of three horses in the handy. The first two are more experienced and I have been riding them for one or two years now, so I planned to be pretty slick on both,” told Wireman. “My plan was similar with Coastal, but I took just a second more in the corners and didn’t take any extra risks, knowing that I was leading coming back.”

Wireman and the talented young gelding floated around the handy track to receive a score of 90 for a two-round total of 182 for the victory.