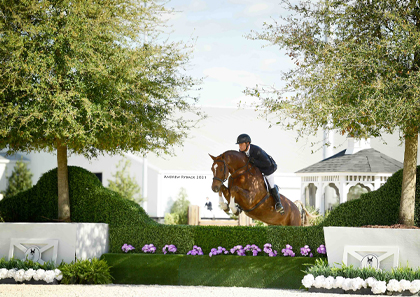 Nineteen entries contested the course in this afternoon’s $20,000 WEC Hunter Derby 3’6″-3’9″. The track featured several opportunities for handy inside turns, as well as a cluster of jumps at the top of the ring that allowed riders to choose a single trot fence or to trot in and canter out of a one-stride line. Entries used the variety of options to their advantage, each choosing a unique set of fences and turns to fit their mount, but it was Jeffrey Ayers and his own Cartel who wowed the judges for top honors in the class.

Ayers and his 10-year-old Warmblood gelding have collected top placings in the $20,000 WEC Hunter Derby 3’6″-3’9″ throughout the World Equestrian Center – Ocala Winter Spectacular. The pair laid down a stellar first round, taking all four high options for a score of 94. They returned last in the order for the handy round, hugging the inside track to fence 3 and choosing the single trot jump option at the top of the ring, as well as all four high options. Ayers and Cartel were rewarded with a score of 91.5 for their stylish performance, and a combined 185.5 to win the class.

Jeff Gogul and Abby Wagner’s No Doubt (Nerrado x Abba II) were also impressive in this afternoon’s derby. Gogul and the 8-year-old Holsteiner gelding topped Week 3’s $15,000 WEC Derby 3′ Open and stepped up to the higher derby today. The duo earned scores of 89.5 and 93, totaling 182.5 for 2nd place.

Ayers of Equi-Ventures Inc. in Sellersville, Pensylvania, and Ocala, Florida, took a moment to chat with us ringside about his win aboard Cartel, “I was really happy with my horse. He was very consistent in both rounds, which is something that we’ve been working on. In previous weeks, our first round has been a bit better than our second round, and he was very good in both rounds today.”

When asked about his plan in the handy round, Ayers commented, “I watched the riders that went before me and saw what they did, and I realized that I didn’t have to make as many hard turns as I had originally thought. I aimed to keep it consistent and find nice distances. Cartel jumps well, so I knew he would take care of that.”

Ayers added, “I am probably the oldest rider out there today at 61 years old, so a win makes me happy!”

Thirty-nine entries filled the Stadium for the $15,000 WEC Derby 3′ Open. The handy round saw fierce competition with a cut-off score of 87.5, but none could best Tracy Fenney and MTM Farm’s MTM Animated (Swarovski x Kirunett). Fenney and the 7-year-old Dutch Warmblood gelding topped the $15,000 WEC Derby 3′ Open during Week 2 of the World Equestrian Center – Ocala Winter Spectacular and returned this morning on the hunt for another win. The pair earned a score of 94 over the first course, the highest score of the first round. They returned last in the order for the handy round, opting for inside turns to fences 4 and 5, along with all four high options. Fenney and MTM Animated were rewarded with a score of 93 for their efforts, bringing their overall score to 187 and landing them in 1st place.

Kate Conover and Take 3 LLC’s Point Blank (Cascari x Hallig VI) were hot on Fenney and MTM Animated’s trail. Conover and the 10-year-old Holsteiner gelding earned 2nd place in last week’s $15,000 WEC Derby 3′ Open and were on form again this morning. The pair earned a pair of 92 scores, totaling 184 for another 2nd place.

Rounding out the top three placings were Belynda Bond and Gesture, LLC’s Norderney. Bond and the 6-year-old Hanoverian mare have earned ribbons in the $15,000 WEC Derby 3′ Open throughout the World Equestrian Center – Ocala Winter Spectacular and were impressive again today. The duo earned scores of 91.5 and 90.75, totaling 182.25 for 3rd place.

Fenney of MTM Farm in Flower Mound, Texas, took a moment to chat with us ringside about her win aboard MTM Animated, “It’s so fun to come here and show, it’s just beautiful. The jumps are amazing. I was super happy with MTM Animated. We are preparing for the $75,000 WEC Derby 3′ Open next week, so this was a good way to head into that class.”

When asked about her plan in the handy round, Fenney responded, “Everyone chose the same track, so I didn’t have much choice but to do the same inside turns. The points were so close coming into the handy that I had to just go for it. MTM Animated went in and did exactly what I asked of him. I did tight turns and left a stride out in one of the lines. He hasn’t done too many shows, due to COVID, so I love it that he just walks in and is perfect.”

She added, “I would like to thank everyone that helped me get here and thank everyone who supports me. We love WEC, we’re hoping to show here this summer. It’s beautiful, you couldn’t ask for a nicer facility.”

This afternoon’s $15,000 WEC Derby 3′ Non Pro hosted a field of 38 entries with 13-year-old Addison McQuaker and her own Golden Ticket (Stakkato Gold) earning their second win of the class this winter. McQuaker and the 5-year-old Oldenburg gelding earned the blue ribbon in the $15,000 WEC Derby 3′ Non Pro during Week 9 of the World Equestrian Center – Ocala Winter Spectacular and were on fire again today. The pair was flawless in the first round, earning a score of 90. The returned near the end of the order in the handy round, taking the inside track to fence 4 along with all four high options, earning a score of 88.5, with a total of 178.5 for 1st place.

Lauren Reid and Capstone Farm LLC’s Legacies Dream were just behind McQuaker and Golden Ticket. The pair earned a score of 85 in the first round, then returned for the handy round, taking inside turns to fences 4 and 5, along with all four high options. They earned a score of 91, totaling 176 for 2nd place.

Elizabeth Kenny and Jai Smith Rezac’s J’Adore Z finished off the top three placings. Kenny and the 5-year-old Zangersheide mare earned top placings in the Young Hunters this week, preparing them well for this afternoon’s derby. The duo earned scores of 86 and 88, totaling 174 for 3rd place.

We caught up with McQuaker of Ontario, Canada, after the class to chat about her win aboard Golden Ticket, “He was really good today. Some of the jumps were new, so I was worried that he might be a little spooky, but he was really brave. In the handy round we weren’t going to do the inside turn, but I ended up doing it.”

When asked about Golden Ticket’s green braids, McQuaker replied, “Green is his color, he always has green braids!”

Before the start of the handy round in the $20,000 WEC Hunter Derby 3’6″-3’9″, the prestigious Style of Riding Award was presented to Josh Dolan for his classic style and his sportsmanship. The Style of Riding Award is generously donated by Bill Rube to be awarded to the rider who best displays the American Style of riding in the ring and sportsmanship outside of the competition arena. The recipient serves as a role model for preserving the integrity and tradition of equestrian sport. “This award is very special to me because the recipient of this award pays it forward both in and out of the show ring,” says Rube. Dolan, founder of The Peeps Foundation, received an elegant leather duffel bag and wore a white rose corsage on his lapel throughout the handy round to signify his achievement.

The Shapley’s Champion Groom Award for the best turnout in the class was presented to Sergio Martinez and Gina Virga, grooms of 6th place finisher in the $20,000 WEC Hunter Derby 3’6″-3’9″, Caspari (Eurocommerce Berlin x Lady-Desi). Shapley’s is a proud sponsor of the World Equestrian Center and is thrilled provide an award each week of the Winter Spectacular to the groom of the best turned out horse. Martinez and Virga received a Shapley’s Award Bucket for the gelding’s stunning turnout.