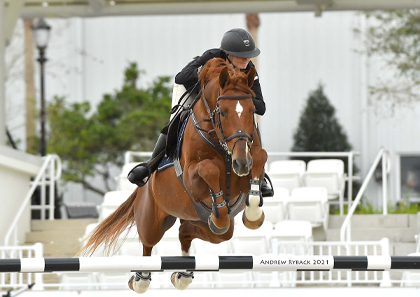 Feature classes for Week 11 of the World Equestrian Center – Ocala Winter Spectacular kicked off this afternoon with 36 entries vying for the win in the $20,000 WEC Welcome Prix. An international field of riders representing 8 countries contested the course designed by Alan Wade of Ireland, an FEI Level 4 course designer. The track featured multiple liverpool fences and three combinations, along with several opportunities for tidy inside turns on the short course. Ten entries jumped double clear, making for tough competition, but none could best amateur Jordan Petersen of High Springs, Florida, and Derek Petersen’s Diamant’s Legacy (Diamant de Semilly x Courtney Love II), who claimed their second $20,000 Welcome Prix win of the season this afternoon.

Petersen and Diamant’s Legacy have earned several ribbons in welcome prix and grand prix classes throughout the World Equestrian Center – Ocala Winter Spectacular, including a blue ribbon in the $20,000 Welcome Prix during Week 3. Petersen and the 12-year-old Oldenburg stallion were on form this afternoon, delivering one of the fastest clear first rounds of the class in 73.644 seconds, well within the time allowed of 79 seconds, before continuing straight to the jump-off. Three entries had managed to jump double clear before Petersen and Diamant’s Legacy, so the pair picked up pace on the short course, hunting for another win. They opted for tidy inside turns to fences 4 and 14, then raced through the timers in a speedy 34.164 seconds, moving to the top of the leaderboard and ultimately winning the class.

Though none were able to catch Petersen and Diamant’s Legacy’s quick time, Jonathan McCrea and Windsor Show Stables’ Jasmijn (Diamant De Semilly x Gitania Van’t Eigenlo) gave the pair a run for their money near the end of the order. McCrea and the 11-year-old Belgian Warmblood mare have earned several ribbons in the $20,000 Welcome Prix throughout the season and were aiming for the win this afternoon. The pair also found one of the fastest clear first rounds of the class in 72.933 seconds, signaling that they would be tough competitors on the short course. They advanced straight to the jump-off, mirroring Petersen’s inside turns and galloping through the timers at 34.905 seconds, moving into 2nd place.

Last in the order were Chilean Olympian Samuel Parot and his own Dubai (Cardento 933 x Ozella). Parot and the 13-year-old KWPN have earned top placings in the $75,000 WEC Grand Prix this season, preparing them well for this afternoon’s 1.45m track. The pair chose a more quiet approach to the first round, jumping clear in a time of 76.534 seconds, conserving plenty of energy for the jump-off. The duo advanced straight to the short course, picking up speed and hugging the inside track. They stopped the clock at 35.509 seconds, moving into 3rd place, leaving McCrea and Jasmijn in 2nd, and Petersen and Diamant’s Legacy in the top spot.