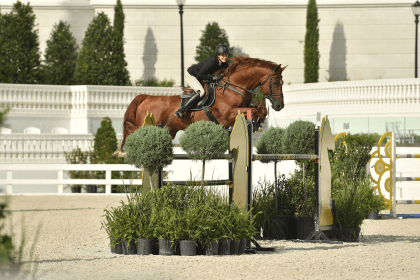 Feature classes for Week VI of the World Equestrian Center – Ocala Summer Series kicked off early this morning with 29 entries vying for the win in the $15,000 WEC Ocala Welcome Prix. A competitive field of riders contested a course designed by Alan Wade of Ireland, an FEI Level IV course designer. The track featured three double combinations, along with multiple opportunities for tidy inside turns on the short course. Nine entries jumped a clear first-round and four entries jumped double clear, but it was Jordan Petersen and Derek Petersen’s Diamant’s Legacy, who captured their second $15,000 WEC Ocala Welcome Prix win this season.

Petersen and Diamant’s Legacy have earned multiple ribbons in featured classes during the World Equestrian Center – Ocala Winter Spectacular, including two wins in the WEC Ocala Welcome Prix. Petersen and Diamant’s Legacy (Diamant de Semilly x Courtney Love II) were on fire this morning, delivering a flawless first-round, stopping the clock at 78.726 seconds, just under the time allowed. “I really enjoyed the course. I thought it was technical with a tight time allowed,” stated Petersen.

Petersen and the 12-year-old Oldenburg stallion, advanced straight to the jump-off, “I put a slice from left to right on fence one, so I could get another good slice across fence two. From fence one to two, to two to three I could really let him go. I tried to be quick back to the double [combination] where I did eight strides to the skinny, then stepped him up to get six [strides] in the last line.” Petersen and Diamant’s Legacy walked down the last line, leaving out a stride to stop the clock at 32.319 seconds for the win.

“Diamant’s Legacy is truly a special guy. If I commit to something and I believe in it, he’s right there with me. He is just an overall incredible horse,” said Petersen.

Though none were able to best Petersen and Diamant’s Legacy’s fast time, Dorothy Douglas and Davenport Farm’s MTM Through The Looking Glass gave a good run near the end of the order. Douglas and MTM Through The Looking Glass (Arkan x Roshai’s Last Tango) delivered a fast and clear first round, stopping the clock at 76.259 seconds, well under the time allowed of 79 seconds. Douglas and the 13-year-old KWPN mare advanced straight to the jump-off, taking a tidy inside turn after fence one to fence two. The pair galloped through the rest of the short course doing seven strides in the last line, to stop the timers at 33.225 seconds, to earn second place.

Jamie Taylor of Temecula, California, and Ali Nilforushan’s Chaman Semilly rounded out the top three in this morning’s $15,000 WEC Ocala Welcome Prix. Taylor received two other top ten placings in the class with Quatar earning fifth and Cocoliche of Greenhill Z taking home seventh. Taylor and the Selle Francais gelding navigated a clear first round in 78.046 seconds. Taylor and Chaman Semilly jumped-off immediately, taking a difficult inside turn to the double combination, stopping the clock at 33.346 seconds, just behind Douglas and MTM Through The Looking Glass.