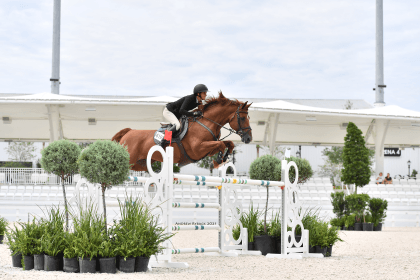 Petersen and Derek Petersen’s Diamant’s Legacy have earned two Welcome Prix wins during the NSBA Summer Series and the pair were second place in last week’s $75,000 Lugano Diamonds Grand Prix, being one of the two entries that delivered double clear rounds. Petersen and Diamant’s Legacy were the second to last pair to enter the class. “I use this class as a warm-up for Saturday night, so my goal is to go nice and smooth and make it to the jump-off. At that point, everyone was making it to the jump-off, so I knew I had to get there and be fast or else I wouldn’t be in the placings,” expressed Petersen.

Petersen and the 12-year-old Oldenburg stallion delivered a flawless first round, jumping each fence with ease to stop the first-round clock at 67.918 seconds, well under the time allowed of 74 seconds. Petersen had an idea of what striding she wanted to take in the jump-off, “On the first roll back from the [C. Jarvis Insurance] oxer to the vertical, I watched Tracy [Fenney] and she did seven strides. So, I knew I had to get seven in the roll back. Then I did the direct nine to the Lugano Diamonds oxer, where I left out a stride and got six strides to the double. In the last line I also left out a stride and got five.”

Petersen and Diamant’s Legacy soared through the finish, stopping the clock at 33.143 seconds, more than two seconds faster than second place finishers Santiago Lambre and The Diamant Rose Z. “Diamant’s Legacy has a huge stride. If I commit to something, he’s right there for me. So, I knew he would help me with all of the numbers I left out, which is where I had the class.”

Olympian Santiago Lambre (MEX) and his own The Diamant Rose Z (The Diamant Rose Z) earned this morning’s second place finish in the $15,000 WEC Ocala Welcome Prix. Lambre also took home fourth place aboard Dingeman and fifth place aboard Doloris. Lambre and the 10-year-old Zangershiede mare delivered a smooth first round toward the end of the order, stopping the clock at 71.003 seconds. The pair advanced straight to the jump-off taking very tight inside turns to stop the jump-off clock at 35.263 seconds.

Third place honors went to Tracy Fenney and MTM Dolce Vita, who were early leaders in the class. Fenney and the nine-year-old Holsteiner mare have had great success in the class, taking home two Welcome Prix wins this season. Fenney and MTM Dolce Vita produced a smooth and fast first round, stopping the clock at 69.265 seconds. The pair advanced straight to the jump-off, taking very tight inside turns and forward distances to stop the clock at 35.833 seconds, just behind Lambre and The Diamant Rose Z.