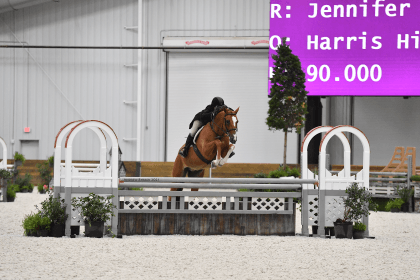 Another Derby Friday has commenced at World Equestrian Center – Ocala in the CaptiveOne Advisors Indoor Arena as thirty-one stunning hunters vied for the win in the $12,500 WEC Ocala 3’6”-3’9” Hunter Derby and the $10,000 WEC Ocala 3’ Hunter Derby. Tucker Williams designed the winding track that featured an abundance of natural obstacles with four inviting high options. Competition was fierce in both derbies with scores soaring into the high 80s and low 90s.

Jennifer Bliss and Harris Hill Farm, LLC’s Poker Face (Tangelo Van De Zuutheve x Nicolette V) performed a beautiful first round, taking all four high options to earn the class’s highest first round score of 93. Bliss was gearing up for Derby Finals in Kentucky, “My goal was to have a nice forward smooth round and I felt like we accomplished that. It was a nice course that flowed well. It was a little challenging in the beginning with a very forward bending line right off the bat away from the gate from fence two to three but it was great practice.”

Bliss and the 16-year-old Dutch Warmblood gelding returned for the handy course delivering a smooth round, taking a few inside turns while jumping all three high options to earn a score of 85, for an overall score of 178. “We were able to eek it out over Dorrie [Douglas], who is always a really amazing handy rider. It is always nerve racking when she goes before you because you know she is going to bring out all the stops. So I tried to just stick with my plan and not go crazy. I just wanted to have a nice smooth round to put him in a confident place for Derby Finals.

Just behind Bliss and Poker Face were Dorothy Douglas and Abigail Davenport’s MTM Lolah LOL (Los Angeles x Palma). Douglas earned top honors earlier today in the $10,000 WEC Ocala 3’ Hunter Derby aboard MTM Milagros. Douglas and MTM Lolah LOL delivered a stunning first round to receive a high score of 90. Douglas and the eight-year-old Westphalian mare were the second to last pair to return to the handy, taking every single inside turn available to earn a score of 86.5 for a two-round total of 176.5. Douglas also received fourth place in today’s $12,500 WEC Ocala 3’6”-3’9” Hunter Derby aboard Steel Away.

Hanna Toering and Condor rounded out the top three in the $12,500 WEC Ocala 3’6”-3’9” Hunter Derby. Toering and Wyette Felton’s Condor also received third place in last week’s derby. Toering and the nine-year-old Warmblood gelding delivered two impeccable rounds, earning a first round score of 89, and a handy score of 87 for a total score of 176.

Earlier on Friday afternoon, thirty entries took to the CaptiveOne Advisors Indoor Arena to contest the $10,000 WEC Ocala 3’ Hunter Derby but it was Dorothy Douglas and MTM Farm’s MTM Milagros that secured the highest overall score, 11 points higher than the second-place score.

Douglas is getting to know MTM Milagros, “She is very new to me, so I was showing her this week to get to know her because in two weeks we’ll be showing in Kentucky. She’s an amazing jumper and is so much fun.” Douglas and MTM Milagros delivered a gorgeous first round, taking all four high options to earn the classes highest first round score of 87.

Douglas and MTM Milagros were the last pair to return for the handy, taking an inside turn that not many other competitors attempted, “My trainer, Mike McCormick, convinced me that I could do it. We were going over the course and I was thinking that there was no way that I am going to jump the in-and-out, go inside the tree, make a quick right U-turn and jump the fence. Long story short, I ended up doing it on both my horses.”

The new pair navigated a flawless handy course, taking each inside turn that was available while jumping all four high options to earn the classes highest handy score of 93, for a two round total of 180.

Second place honors went to Suzanna Treske and her own Macallan (Stalypso x D-Pico Bello). Treske from Waxhaw, North Carolina and the 11-year-old Oldenburg gelding produced a very smooth first round, taking all four high options to receive a score of 83. The pair returned for the handy round, taking multiple tight turns while jumping all four high options for a score of 86, for an overall score of 169.

Douglas also took home third place honors on MTM Farm’s MTM Incanto (Cornet Obolensky x Zaza Di Villagana). Douglas and the six-year-old Warmblood gelding delivered a lovely first round taking all four high options to earn a score of 78. Douglas returned for the handy on MTM Incanto, taking the very difficult inside turn before the tree to receive a high score of 90, for an overall score of 168.

Douglas is very excited about the future for both horses, “I think both horses are going to be amazing small junior derby horses. They have tons of scope, easy lead changes and both jump so well. They are also very relaxed in their environment and aren’t spooky. They just love their jobs.”