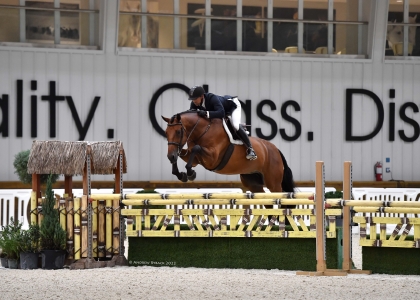 Dolan was familiar with the course, “The course rode really well. I was able to ride the lines in the smaller derby earlier today, so I had a nice feel for it. There were a few more interesting jumps, like the hay bale with the copper topped standards. It was perfect for the last derby.”

Dolan and Ipanema were the first pair on course, delivering an effortless round for the class’s highest first round score of 86.

The pair were the last to return for the handy, “I tried to hold it together because we have been knocking on the door. Kris Killam had a nice score, so I knew I was going to have to take a few risks, but not do anything too crazy,” laughed Dolan.

“I was able to do the inside turn to the double. There was a more patient option out of the turn, but it was a handy, so I went for the forward option, and it was perfect. Then, he jumped the next oxer so big I was worried he was going to try and rush the trot fence, but he melted and stayed so patient. He was so great over the trot fence, I was able to relax and do the nine to the last one.”

Dolan and Ipanema received a handy score of 89 for a two-round total of 175 for the blue ribbon.

A competitive field of 20 horse-and-rider pairings competed for the lion’s share of the prize money over Doug Russel’s flowing first round track. Harold Chopping and Alexis Niepert’s Light My Fire MD (Dallas VDL x Red Flame) caught the judges eye and received two scores in the high 80s for the triumph.

Chopping and the six-year-old KWPN gelding found a lovely first round, jumping all three high options with ease to earn a first round score of 86.

Chopping spoke about the talented gelding, “He’s a wonderful six-year-old that was recently imported from Belgium. He’s been showing here for the past three weeks and has been in the ribbons each time. He was fifth or sixth the first week, second last week and won this week. He’s very consistent. His best trait is that he doesn’t make mistakes. He just goes in and is more impressive each time.”

Chopping and Light My Fire MD returned for the handy, “He’s a big mover that never gets quick during a challenge. He just slows down and jumps higher, so I was able to take a short approach to the two stride and press my way through for a nice curve. Then I tried to stay on the tidy track back to the next oxer and he was great over the trot jump. He never seems to panic or tense up at a challenge which is remarkable for his age.”

Chopping and Light My Fire MD found a score of 88 for an overall 174.

Twenty-four horse-and-rider combinations competed in the $10,000 WEC Ocala 3’ Jr/Am Hunter Derby, but it was Catalina Peralta and Wendy Peralta’s PS Call ME (Casall x Charleen) that secured the win.

Peralta and the eight-year-old Holsteiner mare were the first pair in to attempt Doug Russell’s open tracks. The pair delivered a gorgeous round to earn the class’s highest first round score of 91.

“We have had PS Call Me since she was a foal. We bred her when she was young and now we have one of her babies. Tina [PS Call Me] is an incredible mare. This is actually her first derby ever, so she is already off to a great start.”

Peralta and PS Call Me returned for the handy, “I don’t show in the hunters that often. I am primarily found in the jumper ring, so my goal was to have a consistent pace. I tried to not get too twisty with the inside turns, and most importantly, just have fun.”

The stylish pair rolled around the handy track to earn another score of 91 for a two-round total of 182.

Peralta spoke about the lovely mare, “She has been great. She’s proudly offered for sale now, but until she sells, we are going to keep developing and progressing, but I think she has a great future ahead of her.”