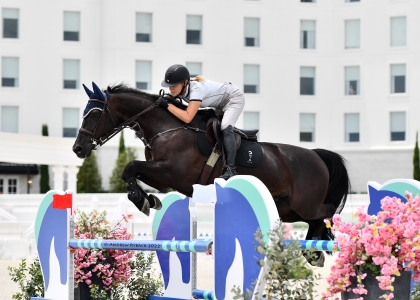 Of the 35 pairings, seven horse-and-rider combinations representing four different countries managed to keep all rails up in the first round and three ultimately went double clear.

The first double clean ride of the class was secured early in the other by Gemma Paternoster (GBR) and Alan Chesler’s Ibalius SMH (Everglade VDL x Ribalia H.B.). Paternoster and the 9-year-old KWPN gelding found an efficient jump-off track in 47.380 seconds, which ultimately earned the pair the third place spot on the leaderboard.

Victoria Heurtematte and her own Scarlett Du Sart Z (Stakkato x Quareka Rouge) followed Paternoster and Ibalius SMH’s with a clean first round. Heurtematte and the 12-year-old Dutch Warmblood mare galloped around the short course in 46.549 seconds which was good for the red ribbon.

Tracy Fenney and Mike McCormick’s MTM Caepten produced the next clean round.

MTM Caepten is a new mount for Fenney, “He has been here for maybe a month now. He’s such a cool little horse because he carries his own motor and is ready for whatever you need him to do. I feel like a little kid riding him because it’s just point and shoot with him.”

Fenney and the 10-year-old Warmblood gelding advanced straight to the jump-off, “Even though he’s small he has a big step, so I was able to leave strides out, but take the inside turn to the double combination easily.” The pair flew around the short course to stop the timers in an unbeatable 44.480 seconds.

“I think [MTM Caepten] is going to make an amazing Young Riders or Junior/Amateur jumper. He’s so straight forward, and adjustable. You can just go jump around on him, he’s just a point-and-shoot type of horse.”

Week IX of the 2022 USEF Summer Series at World Equestrian Center – Ocala closed with 22 top horse-and-rider combinations vying for the win in the $10,000 1.40m Jumper Classic. Doug Russell (USA) crafted a track that was quite the challenge and only two managed to jump clear in the first round. It was Tanimara Macari and her own Feminka (Verdi x Veminka) that secured a time that was more than three seconds faster than second place.

Macari spoke about today’s opening track, “It was a pretty tough course. I had three horses in today’s class, so I had three chances. On my first horse, I had one down, so I knew I had to fix a few distances on my next one,” said Macari. “By the time I returned on Feminka, there still weren’t any clears, so I just focused on staying smooth.”

Macari and the 12-year-old KWPN mare found a seamless track in the first round, leaving all rails up to qualify for the jump-off. “I wanted to be as fast as possible. I ended up having one down, but there was only two of us in the jump-off, so it worked out.”

The pair flew around the short course in 36.019 seconds with one rail down.

Macari spoke about the talented mare, “I know Feminka very well. I bought her as a seven-year-old and she is now 12. She is my heart horse and I am very happy to end the week on another high note.”

Kris Killam and his own Cascaya L (Camax L) were the only other pair to qualify for the jump-off. Killam and the 12-year-old Warmblood mare galloped around the short course in 39.594 seconds, but also fell victim to one rail down.

Luis Sabino Goncalves and Sigma Stables LLC’s Sigma  (Numero Uno x Obi De La Louviere) rounded out the top three. Goncalves and the nine-year-old Selle Francais gelding were able to leave all rails up in the first round, but incurred three time penalties with a time of 81.017 seconds, just over the time allowed of 79 seconds.