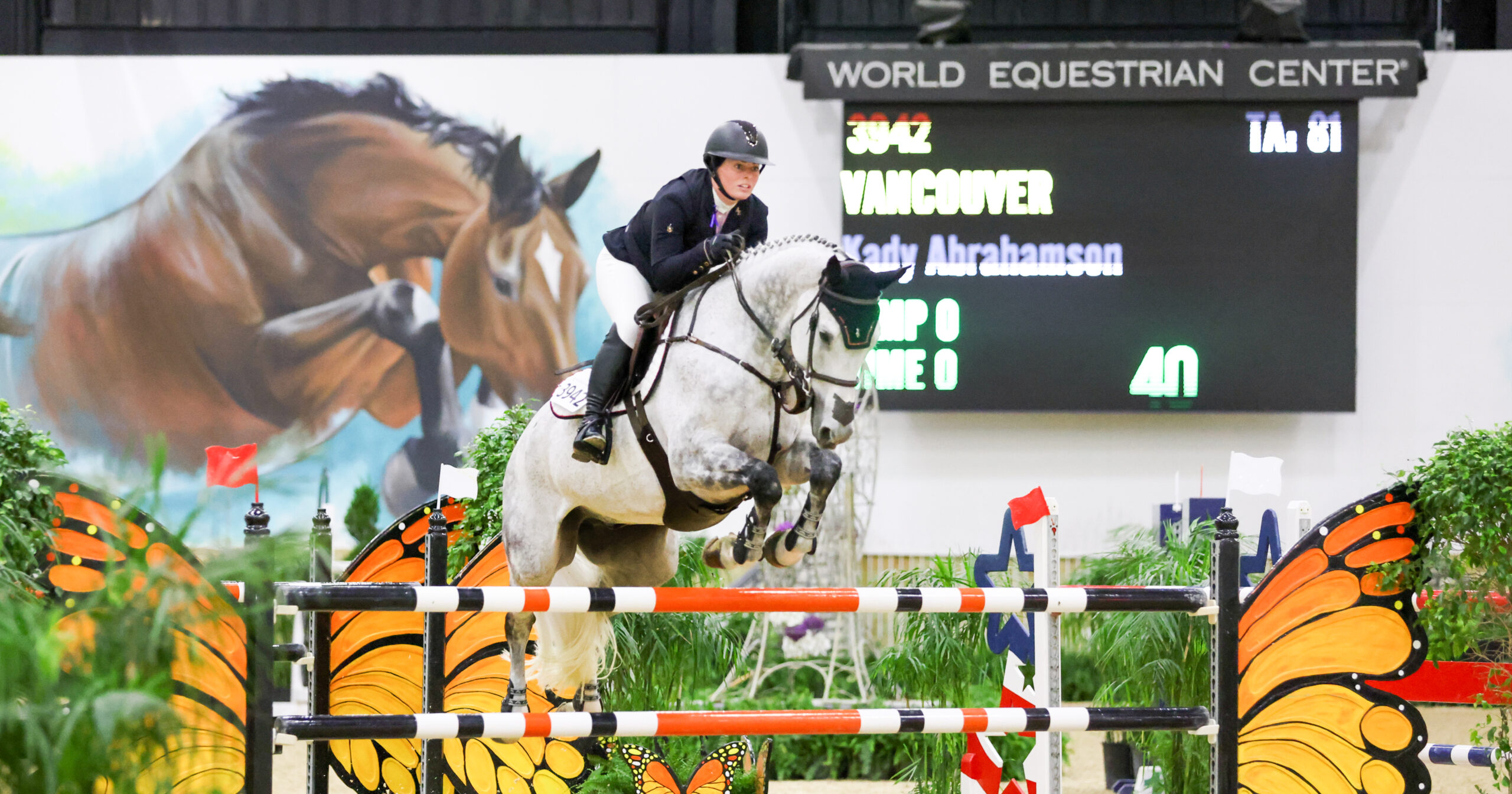 “This was Vancouver’s first WEC Grand Prix win! I’m so happy,” Kady exclaimed as she chatted ringside with WEC.

Abrahamson, of Georgetown, KY, and the thirteen-year-old gelding played it safe in the first round, carefully navigating the course to stop the clock at 79.394 seconds, just under the 81-second time allowed.

Last to ride the short course, Abrahamson had spectators on the edge of their seats. Vancouver’s tight inside turns and pace paired with Abrahamson’s clever riding, landed the duo in the winner’s circle in a lightning-fast 36.975 seconds.

“Tonight’s first course was definitely not made for him, but we persevered and got through it. The jump-off was his all day! He is huge and a hot-blooded horse and it fit his style so well. He’s so in-tune with me, which allowed him to turn on a dime. I also had a lot of leave-outs through the lines and it worked out perfectly.”, mentioned Abrahamson.

Jumping into the third-place ranking was Richard Rinehart and Ron Caraway’s Vincent (Van Gogh x Nirande). Rinehart navigated two seamless rounds, clocking 76.441 seconds in round one and a tidy clear in 40.020 seconds in the jump-off.

Pease of Windcrest Farm in Lexington, KY, diligently piloted the fifteen-year-old Dutch Warmblood gelding through a challenging 14-effort Futures Prix. The jump-off offered several options for inside turns, which Pease incorporated as part of her winning strategy.

The pair managed a clear first round, clocking in at 76.393 seconds, advancing directly to the short course.

They caught their breath before galloping through the jump-off track, leaving all rails up and stopping the clock at 35.085 seconds for the win.

WEC chatted with Pease on the walk back to the barns. “The jump-off had some degree of difficulty and so many options. You could make it quickly through the inside turns or be quick by going around and covering more ground. Going into the class, I was unsure of my decision, but we decided to just go for it and opt for the inside turn and it paid off!”

Junior Ashley Stumm and her own Ismael (Numero Uno) yielded two quick rounds to finish with second-place honors. She and the speedy nine-year-old dark bay gelding notched times of 76.082 seconds in the first round and 36.919 seconds in the jump-off.