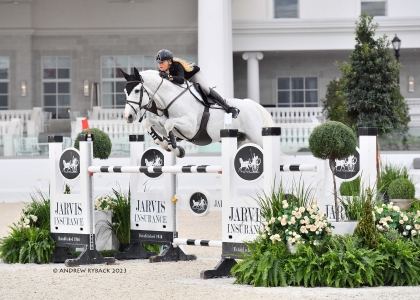 The welcoming tracks for today’s class were built by FEI Level II course designer Tucker Williams (USA) with assistance from Bobby Murphy (USA) and Pat Muskus (USA). Of the starting 27 entries, 11 competitors representing four different nations qualified to return to try their hand at the short course. Competition was fierce in the jump-off with a changing leaderboard throughout the class.

Pathfinder Jacqueline Ruyle (USA) and her own San Chano were the first pair to return for the jump-off. The pair found a swift track to stop the clock at 40.614 seconds. Ruyle and San Chano’s time stood until Tracy Fenney entered the arena aboard MTM Apple owned by MTM Farm.

Fenney (USA) and MTM Apple (Favorit Ask x Kong’s Whopsie) have been on a roll, recently securing both Welcome Prix and Grand Prix victories during Week II of the 2022 Fall Show Series at World Equestrian Center – Ocala. Today, Fenney and the 12-year-old Danish Warmblood mare continued their successful run, posting a time of 38.243 seconds in the jump-off, more than two seconds faster than Ruyle and San Chano.

However, victory was not yet sealed as Santiago Lambre (BRA) and his own J’Adore Van Het Klinkhof (Thunder Van De Zuuthoeve x Tequila VH Noordeneind) entered the arena with determination. Lambre and the 14-year-old Belgian Warmblood mare soared around the short course, to stop the clock at 37.223 seconds and steal the lead.

Vanderveen had a simple plan for the jump-off, “I knew I was going to have to lay more on the line. Tracy and Santiago were both very fast, but the jump-off offered a lot of open spaces to gallop and that’s ‘Frosty’s’ specialty,” said Vanderveen.

“His stride has always been a huge strength of his – it’s deceptively and abnormally large. I have had a few riders tell me that they don’t ever watch my round because it’s just too unrealistic for their normal horse’s step. Frosty does it without trying.”

Vanderveen used the 18-year-old Belgian Warmblood stallion’s massive stride to her advantage in the jump-off, leaving out three strides in the final line. “I am not a big counter, but I was thinking eight would be the forward option there, but apparently, it was seven,” joked Vanderveen.

Vanderveen and Bull Run’s Faustino De Tili flew through the finish, halting the timers at 36.774 seconds to secure the top spot on the leaderboard.

It was a great start to the 2023 Winter Spectacular Show Series for Vanderveen, “We like that kind of kick-off. We are very excited to be here for the circuit as we’ve just made Ocala our home base. Throughout the years we have built up some clientele and everyone loves it here, so we decided to call this home.”