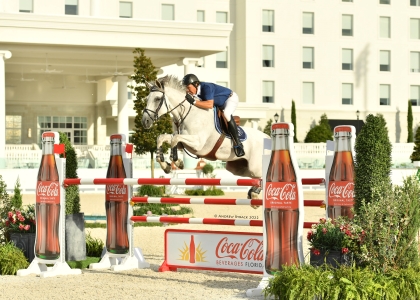 Goncalves entered the arena with the 13-year-old Selle Francais mare halfway through the class. The duo flew past the competition, finishing the speed portion in 30.16 seconds to hold the victory.

Sigma Stables LLC’s Vick Du Croisy is a brand-new mount for Concalves, “Vick Du Croisy came last Tuesday from quarantine. This was her first week showing and she jumped to third on Wednesday in the 1.45m Speed class. She won’t do the grand prix this week, but hopefully the national grand prix soon.”

Goncalves was determined to win today, “Yesterday, I told my staff that I would win today and treat them to the best restaurant in Ocala for all of their hard work.”

“I am very excited to see what’s in store for this mare. Once she gets into a bit more shape, I think she is going to be unstoppable. She has already done a few four-stars in Italy,” said Goncalves.

Second and third place was secured by Aaron Vale in today’s FEI CSI3* Power & Speed class. Vale captured the second place finish toward the end of the order aboard Thinklikeahorse’s Condarco (Conthargos x Darko). Vale and the 14-year-old Oldenburg gelding gave the speed portion all that they had in 30.37 seconds.

Vale and his third place mount, Obi Wan (Centadel x Continue) were the original pathfinders for the class, producing the first fault-free course in 31.21 seconds to ultimately take home the third place ribbon.