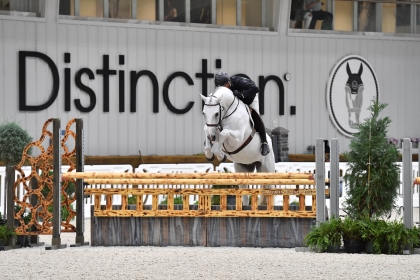 The best came to play in the $12,500 WEC Ocala 3’6”-3’9” Hunter Derby, but none could best Timothy Maddrix and the brilliant Shutterbug (Catango Z x Seuerka). Maddrix is at the top of his game, earning the top spot in last week’s $10,000 WEC Ocala 3’ Open Hunter Derby aboard Candid Traveler.

Today, Maddrix continued that success aboard the 14-year-old Czech Warmblood gelding owned by Sarah Campbell. Maddrix and the stylish gelding yielded a superb first round, jumping all three high options to earn the class’s highest first round score of 91.

The pair was the last to return for the handy, “The handy was hard. Dorrie [Douglas] went in and did a turn that I wasn’t planning on doing. She did the tight turn after fence one, before the double combination. I knew I had to do exactly what she did in order to win, and it had to be done well.”

Maddrix and Shutterbug navigated a seamless second round, taking all of the inside turns while jumping each fence in perfect form to secure a score of 89.5 for a two-round total of 180.5 for the victory.

Shutterbug earned some time off after his victory today, “I probably won’t do much more with him. Our goal is derby finals, so he may come back to do a few more derbies as prep, but until then he gets to go relax for a few weeks,” said Maddrix.

Young and the seven-year-old Warmblood mare delivered a beautiful first round for a score of 91. “Hela is a little mare that I got about seven months ago. I started her in the 3’ Greens and recently moved her up to the 3’3” Greens. She is an amazing mover with a gorgeous jump,” Young expressed.

Second-to-last to ride, Young and Hela laid down an impressive performance to earn for a score of 89.5 for an overall score of 180.5.

Young is excited to continue to develop Hela, “Next year she will go on to do the first years. I have done the 3’6” with her and she was fantastic. I didn’t want to break her green, so I stuck with the 3’3” derby this year. Next year, she will come out to do the big derbies.”

Jennifer Prior & Having Said That Are Victorious in the $10,000 WEC Ocala 3’ Jr/Am Hunter Derby

The $10,000 WEC Ocala 3’ Jr/Am Hunter Derby saw 28 gorgeous hunters compete for the win, but it was Jennifer Prior that emerged victorious aboard her own Having Said That.

Prior and the 13-year-old Warmblood gelding by Cornet’s Prinz produced an impeccable first round, opting to take all three high options to earn a score of 87.

Prior has owned Having Said That for a few years, “He is a lovely horse. I have had him for four or five years now and he has been a blessing. He’s a total sweetheart in the barn and always tries his best for me in the ring.”

The duo came back for the handy with one simple goal, “Not to mess up. I knew a I was ahead so I planned on focusing on my turns and pace. He was perfect and I am very happy with our ride.”

Prior and Having Said That created a lovely round to earn a score of 86 for an overall score of 173.