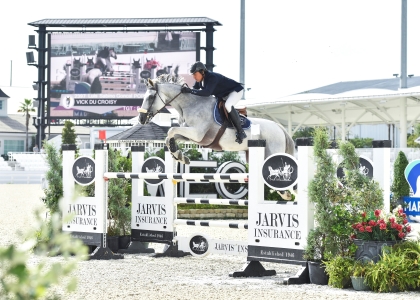 Of the 48 starters, nineteen managed to jump clean in the first round and eight produced a double clear effort. In the Table II.2b. format, competitors were asked to remain in the arena for the jump-off where Portugal, the United States and Argentina raced to gain the lion’s share of the prize money.

Luis Sabino Goncalves (POR) and the speedy 13-year-old Selle Francais mare entered the class at the halfway mark, producing a clean first round well under the time allowed of 82 seconds.

Although, the partnership between Goncalves and Vick Du Croisy is still fresh, the talented duo has already racked up a list of victories during World Equestrian Center – Ocala’s 2022 USEF Summer Series.

“Vick Du Croisy is confirming that she just gets better and better every time she steps in the arena. She is a very fast mare, almost a little too fast in the beginning, but she’s more under control now,” laughed Goncalves.

“I was aiming to go fast, but not too fast, so I didn’t risk a rail, but she was feeling spot on today, so I decided to try and win it.” The pair flew around the short course in 32.196 seconds to secure the lead.

Goncalves spoke about the athletic mare, “I try my best to not disturb her. She’s quick with her thoughts, careful and has very fast reflexes. I have to pause for a second and remind myself that she’s so naturally quick, I don’t ever have to rush.”

The third fastest double clean effort was taken by Luis Pedro Biraben (ARG) and his own 12-year-old Oldenburg mare Chacco Bumpy (Chacco-Blue x Too Bumpy II) with a time of 33.493 seconds.