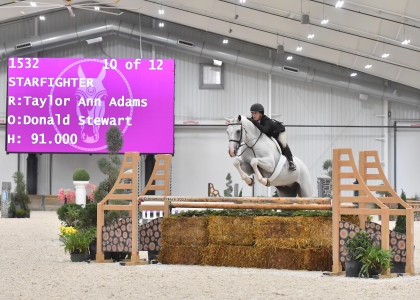 A who’s who of top hunter riders vied for the lion’s share of prize money in this afternoon’s $12,500 WEC Ocala 3’6”-3’9” Hunter Derby, but it was Taylor Ann Adams and Donald Stewart’s Starfighter (Stolzenberg x Caliku) that found two scores in the 90s.

Adams and the 10-year-old Hanoverian gelding yielded a foot-by-foot perfect first round earning the highest score of the series with a 98.

“The first course suited him very well. He was incredible today. I haven’t ridden him since last derby Friday and he was still jumping top-notch,” laughed Adams.

Adam was ready to show off in the handy, “My business partner, Colin Savaira was my voice of reason. He told me that I should aim to have a smooth and consistent round. I don’t have to be the hero. So, I want to thank Colin for his intelligent words today. I couldn’t do any of this without him.”

The pair floated around the handy course, jumping all three high options with ease to secure a score of 95 for a two-round total of 193.

Tracy Fenney Makes Memories in the $10,000 WEC Ocala 3’ Open Hunter Derby Aboard MTM In The Moment

The $10,000 WEC Ocala 3’ Open Hunter Derby set off Week VIII’s Hunter Derby Friday with an elite field of 17 stunning hunters. Tracy Fenney secured the victory by a whopping 13 points with her new mount, MTM In The Moment (Diarado x Joyblesse Of Ballmore) owned by MTM Farm.

Fenney and the nine-year-old Warmblood gelding navigated a superb first round for a score of 92.

Fenney spoke about the talented gelding, “We just imported him. His previous owners thought that he was going to be a big four or five star horse, but soon found out that he was just too quiet. So, that’s how I got him.”

Fenney and MTM In The Moment were the last pair to return for the handy, “I almost wanted to go inside to the second jump, but on my other horse, who I was in second place with at the time, I made a mistake. So, I told myself I can’t mess up twice, and focused on creating another consistent round.”

The duo delivered an impeccable handy round to earn a high score of 97, for a two-round total of 189.

Fenney is excited for the talented gelding’s future, “I think he is going to be an incredible big derby horse. I would be doing the big derby now, but I didn’t want to break his green. He doesn’t look at a single fence and doesn’t need any prep. He’s the best.”

Thirty-eight horse-and-rider combinations competed for the ultimate prize in the $10,000 WEC Ocala 3’ Jr/Am Hunter Derby, but it was Katalena Prusso from Woodstock, Georgia that snagged both first and second place with scores in the 90s on both mounts.

Prusso navigated gorgeous first rounds, earning a score of 92 on Viscolando and a score of 90 aboard Judy Kerr’s Camelot.

Prusso returned first aboard the 13-year-old Warmblood gelding Camelot. The pair swiftly delivered the inside turns to receive a score of 96 from the judges for a total of score of 186, securing the victory.

Viscolano owned by Falcon Ridge Stables, found the second place spot with Prusso with a handy score of 90 and a overall score of 182.

Prusso spoke about both of her mounts, “Camelot is an amazing horse owned by Judy Kerr. He is so much fun to ride and really tries to win for you,” told Prusso. “Viscolano is my mom’s horse. He’s young and just starting to do the derbies. I went a bit wider in the handy with him, because I knew this was all still so new for him.”