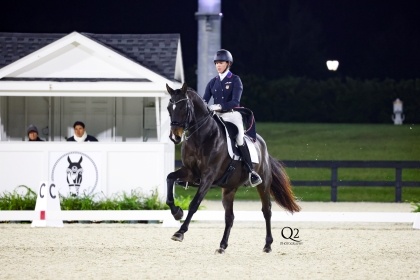 Marek closed her day with a win in the Grand Prix for Freestyle CDI3* presented by MARS Equestrian with Fire Fly, a 12-year-old KWPN gelding by Briar owned by Janet Simile. They led with a score of 70.152% over Sarah Tubman (USA) and Summit Farm’s First Apple in second place on 69.783%. While Marek has focused on the Special test in the past, including at the September CDI3* at WEC where they won the Grand Prix and Grand Prix Special tests, she knew that the freestyle was the goal in November.

“I’m so excited for the freestyle,” admitted Marek. “Terri Gallo made it for us, and she did an awesome job. We’re really excited. I actually did it at the last WEC national show to try it out and see how it would work out. I worked out some little kinks from the show, and then I wanted to come here and do it under the lights.”

While Marek noted that Firefly can “be a bit spooky sometimes,” she was pleased with the relaxation he showed in Thursday’s test, which was clean of mistakes.

“There were a couple of things that we can do better,” she said. “He just gets a little tense and wants to do it so badly. He doesn’t want to make a mistake. Throughout the test, he relaxed, and he gave me a really good feeling.”

Marek has only ridden Fire Fly for a year and is getting to know the talented horse. She is excited for what is to come in Friday night’s freestyle.

She noted, “Every single time that we go out, he gets better and better. I’ve watched the freestyle a bajillion times on the practice video. I think that I’m going to go for it. This is my plan right now. I know the marks. Sometimes you get in there and you’re like, ‘Is this where I’m supposed to do it?’ I wanted to put in a really good Grand Prix and get set up for it, and then I can enjoy the rest of the weekend. I was stressed out enough about this test and now I can enjoy and show off a little bit.

“I haven’t had a whole lot of experience with freestyles,” continued Marek. “It’s not always my favorite thing because of following the music, and it’s such a talent to be able to follow the music and ride your horse really well and hit the beats and not make mistakes. It just takes time and practicing it. I love the music to this freestyle, so it makes me excited to ride to it.”

Marek was also the winner in the afternoon’s Prix St. Georges CDI3* with Duvel, a 14-year-old KWPN gelding by Florencio owned by Cynthia Davila, with a score of 72.108%. Second place went to Nora Batchelder (USA) on her own Fashion Week with a score of 67.843%.

It was Marek’s first time competing in the Stadium Arena, as last year she had just given birth to her daughter Mae and was only training students at the December 2021 event. “It was awesome to be out here, and it was friendly for the horses,” she said of the welcoming environment.

“I was very happy with Duvel,” she added. “He had a great warmup, and he had a fairly clean test. We had one little mistake in the four-tempis that kind of surprised both Duvel and I because he’s so solid with all of the movements. I think he tripped or something. The rest of the test felt awesome. I was happy to know that he went in there and stayed so relaxed, but I could also turn some power on.”

As Duvel stands 17.3 hands high, it’s a comfortable ride for Marek, who is six feet tall.

“It’s perfect for me!” she said with a smile. “[My coach] Anne [Gribbons] has worked with me for years on him and every time she schools me, she says, ‘This horse fits you just perfectly.’ He feels so comfortable, and I just sit on him perfectly.”

Münter Returns to the Winner’s Circle

Rounding out the day’s international victories was Mikala Münter on Salsa Hit, a 13-year-old Oldenburg gelding by Samba Hit III x Riverman-ISF. They won the Grand Prix for Special CDI3* with a score of 70.152% over Lehua Custer (USA) and F.J. Ramzes owned by Wendy Sasser, who placed second with 69%.

It was a triumphant return to the winner’s circle for Münter and Salsa Hit, who won in their first grand prix attempt together in January 2021. With solid placings throughout 2021 but some reconsideration after the 2022 winter show season, Münter was giving the talented gelding time off. However, in July of 2022, Münter was felled by a broken leg in a riding accident.

“I have a really good freestyle, but I went a little overboard and did it one too many times,” she said. “I did the five star [in Wellington], and he got super hot. I didn’t want to fry this horse. He’s been so good and so honest. I said I would take the summer and just do national shows. Then I broke my leg in late July. I didn’t ride for three months and just got back a month ago. He had a little break, but I had really good help and super riders help me while I was on the ground.”

While Münter admitted she’s not back to full strength yet, Salsa Hit made up for the “weakness in my left leg” by performing commendable two-tempi changes in the test.

Münter was extremely pleased by the maturity and poise that Salsa Hit showed in the test.

“A lot of times I’ve just been along, hanging behind him, and he’s been flying around the arena,” she recalled. “I wasn’t really in control. This was probably the best test I’ve had, control-wise. He was through, he was waiting for me; I was allowed to drive and push the buttons a little bit. I’m not used to that feeling. Hopefully, if this is his new self, then that would be wonderful, and I could push a little bit more. He loves this so much. He’s the one who is telling me how it goes.”