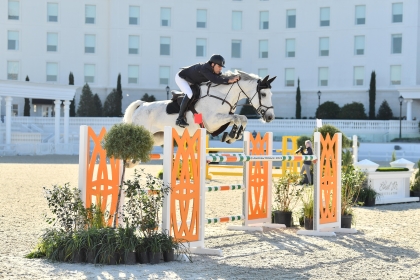 Ocala, FL – The $24,000 C. Jarvis Insurance Welcome Prix was the highlight event of the afternoon as 22 horse-and-rider combinations competed over a complex track built by FEI Level III course designer Peter Grant (CAN). The competitive class finished with Santiago Lambre (BRA) repeating his victory from last week, but this time earning first and second place.

Nine of the 22 starters qualified for the jump-off and five of the returning entries managed to yield a double-clean effort.

Lambre is excited about his new partnership with J’Adore Van Het Klinkhof , “’J’Adore’ is a great mare. My brother, [Rodrigo Lambre] has been riding her for the last four or five years. They have done a few five-star and Nation Cup™ competitions. She is 13 years old now and will continue to compete at this level. I think we might do a few FEI classes too.”

After Lambre, a few other competitors tried to capture his time, but did not succeed, it wasn’t until Lambre returned later aboard his other mount Casey (Cartani 4 x Graciana). Lambre had a plan for the 12-year-old Hanoverian mare in the jump-off, “I did eight strides from one to two. The seven was possible, but fence two was a bit spooky. Then I left out a stride from the green vertical to the C. Jarvis vertical. Casey has such a big step, she was easily able to leave out a stride.”

Lambre and Casey flew to the final fence in 39.628 seconds to slide into first place.