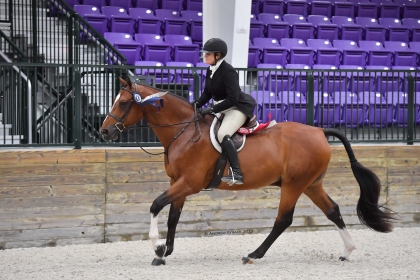 Maria Rasmussen started and ended her day with a victory. The $12,500 WEC Ocala 3’6”-3’9” Hunter Derby saw a viable field of 18 impressive hunters, but Rasmussen was on her A-game with both of her mounts, securing first place aboard SVF On My Own and second place on Worthy, both owned by Sunset View Farm LLC.

Rasmussen went first aboard SVF On My Own (Tangelo Van De Zuuthoeve x Santa Caterina), yielding a superb first round to earn the class’s second highest score of 90. Later in the order, Rasmussen returned on Worthy, navigating a beautiful track while jumping all three high options in perfect form to secure a score of 86.5.

Rasmussen returned first aboard the 11-year-old Holsteiner gelding Worthy, creating a lovely round while taking numerous inside turns for a high score of 91 and an overall score of 177.5.

“The course designer gave us some great options in the handy that really allowed us to show our horses off. The jumps were pretty big today, so I was a bit nervous, which I usually never am, but the horses ended up jumping so well, it all worked out,” replied Rasmussen.

Rasmussen and the 12-year-old Dutch Warmblood gelding SVF On My Own were the last pair to return for the handy, navigating a seamless round to earn the highest handy score of 93 for a final score of 183 for the blue ribbon.

“SVF On My Own has been with me for quite some time. I adore him. I adore all of my horses, but we have been on a rollercoaster of a journey, so this win meant a lot to me.”

Rasmussen spoke about her time at World Equestrian Center – Ocala, “This was a great way to end our last week here. I am so sad that we even have to leave,” laughed Rasmussen. “We had the best time. We love it, the horses love it and we will definitely be back. I mean how could you not, the footing, jumps, courses, stalls, everything is just unbelievable.”

Rasmussen and SVF James (Diacontinus x St. Pt. Hauptstutbuch Chanell) delivered a beautiful first round, jumping all three high options to secure a score of 88 from the judges.

Rasmussen had an idea for the handy, “SVF James is a very handy horse, so I knew I could do most of the inside turns. Then when they set for the handy, Peter moved some of the jumps, so I was able to tone it down a little.”

The pair floated through the handy, easily rolling through the tight turns to capture a score of 91 for a two-round total of 179 for the triumph.

Rasmussen believes SVF James has a promising future ahead, “He’s currently a Pre-Green horse. We have been preparing for the Incentive Hunter Finals. He has so much scope and he’s so brave, I think he’s going to be an incredible Junior Hunter. He tries super hard and loves his job.”

Thirty-eight pairs hunted for the top prize in the $10,000 WEC Ocala 3’ Jr/Am Hunter Derby, but it was Lilly French and Stephanie Keen’s Calrissian that rose to the top of the leaderboard.

French and the 11-year-old Belgian Warmblood gelding (Breemeersen Adorado x Hot-Line VH Hazelarenhoekje) found a delightful first round to receive a score of 84.

“I have been riding Calrissian since March. This is our fourth show together, I started showing him in the beginning of Summer Series. He is so much fun. I am so lucky to be able to ride and show him. It’s a privilege to be able to ride a horse like him. He’s so brave and gives you his all every time he steps in the ring.”

French and Calrissian returned for the handy, “The plan was to just go for it. I know the horse well enough; I knew he would land his leads and be able to make the turns. He’s a very nice equitation horse and has done the jumpers, so inside turns for him are not a problem.”

The pair rolled around the course, jumping all three high options with ease to earn a score of 85 for an overall score of 169 for the win.

“The handy was beautiful. He stayed right with me, and we were able to do all of the inside turns easily. It was a hard course and asked a lot of questions, but he made it feel easy.”