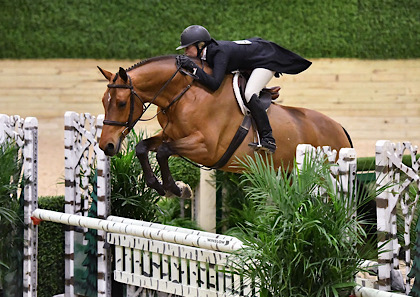 Tough competition saw only a few pairs with scores in the 90s and ultimately it was Meg Howard-Fuleky and her longtime partner, Lissa Guyton’s News For You (I Am Moerhoeve’s Star x Boule De Neice IV), who delivered two flowing and foot-perfect rounds to take the win.

Howard-Fuleky of Fox Meadow Farm in Temperance, Michigan, and the 9-year-old Belgian Warmblood gelding laid down a brilliant first round, taking all four high options for a score of 91.

Fox Meadow Farm’s Christopher Coberly and Havens Schatt’s Actender PS (Action Breaker x Conpila) earned the high score of the first round with an impressive performance that included all four high options for a score of 92. The pair had a successful 2021 winter circuit at World Equestrian Center in Ocala, Florida, with top placings and a $15,000 WEC Non Pro 3’ Hunter Derby win.

Melissa Donnelly and Elizabeth Becker’s lovely gray Holsteiner gelding Corlando 49 (Cartani x Olanda I) delivered a stylish first round that earned them a score of 87.

Based out of Just A Folly Farm in Oxford, Michigan, Donnelly and Corlando 49 are frequent competitors at World Equestrian Center and have earned many national hunter derby victories during their seven years together.

In the handy round Donnelly and Corlando 49 returned late in the order, taking inside turns and opting for all four high options. The pair earned a score of 92 for their efforts, bringing their total score to 179 and moving them into the lead.

Howard-Fuleky and News For You returned shortly after Donnelly, taking inside turns and all four high options with an elegant round that earned a score of 93, bringing their total score to 184 and making them the new class leader.

Last to return were Coberly and Actender PS who also took inside turns and chose all four high options. The pair was rewarded with a score of 91, bringing their total score to 183, moving them to second place and Donnelly and Corlando 49 into third to round out the top three