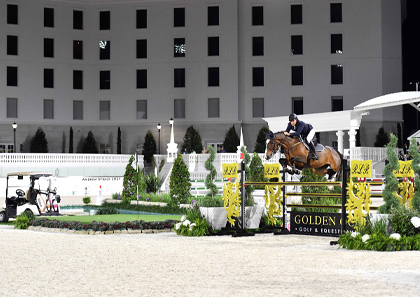 Thrilling equestrian sport filled the WEC Grand Arena today for the $75,000 Grand Prix sponsored by Golden Ocala Golf & Equestrian Club and the $7,500 Futures Prix. Courses for the classes were designed by Catsy Cruz of Mexico and featured winding tracks with multiple combinations and jump-offs that rewarded a steady, accurate ride.

This evening’s $75,000 Grand Prix was sponsored by Golden Ocala Golf & Equestrian Club, where the LPGA Drive On Championship presented by Volvik is being held this weekend. In honor of the event, a stunning decorative putting green was added to the large water feature inside of the WEC Grand Area. Twenty-seven entries took a swing at the 1.50m track under the lights this evening, but Santiago Lambre was on par, taking 1st and 2nd place aboard his own Comtess and Easy Girl (Conthargos x Nanina), respectively.

One of the first entries to jump a clear first round was Bryn Sadler and Showcase 81, LLC’s Cinven CR (Clearway x Raissa CR). Sadler and the 13-year-old Holsteiner gelding have earned several ribbons in feature jumper classes throughout the World Equestrian Center – Ocala Winter Spectacular including two 2nd places in $20,000 Welcome Prix classes. Tonight the pair jumped a clear first round in 82.905 seconds, well within the time allowed of 87 seconds, securing a spot in the jump-off.

Mexico’s Santiago Lambre and his own Comtess were next to jump a clear first round. Lambre and his scopey mare topped the $20,000 Welcome Prix during Week 4 of the World Equestrian Center – Ocala Winter Spectacular and returned to the WEC Grand Area tonight searching for another win. The duo left all rails up in the first round in 82.957 seconds, ensuring a return on the short course.

Lambre also secured a spot in the jump-off aboard his own Easy Girl (Conthargos x Nanina). Lambre and the 10-year-old mare have taken several top placings in various feature jumper classes throughout the World Equestrian Center – Ocala Winter Spectacular, even finishing in 2nd place in the $75,000 WEC Grand Prix during Week 4. The pair was also quick and clear in a time of 82.536.

The course was adjusted and six entries returned for the jump-off. Sadler and Cinven CR were the first entry to jump clear, leaving all rails up in a time of 37.341, setting the time to beat for the remaining entries. Next in the ring were Lambre and Comtess. With no inside turn options and just one clear, the pair kept a steady pace, ensuring that they cleared every fence while keeping a quick time. They crossed the timers at 36.506 seconds with a second clear round, moving into the top spot. Lambre still held the lead with Comtess when he returned aboard Easy Girl. He took to the course with the same strategy, keeping a strong pace but remaining careful over the fences. The pair stopped the clock at 37.216 seconds, sliding into 2nd place by just over a tenth of a second, leaving himself and Comtess in 1st place.

Lambre took time to chat with us ringside about his rides in the class, “All four horses that I rode in the class jumped great. I had two horses that had four faults and I was lucky to have two in the jump-off. Tonight, it was not a crazy fast jump-off like the other week. I lost one grand prix at the beginning of the winter by running to the last fence, so I thought I would stay more conservative tonight. There were no inside turns and I saw that there was one clear before me, but the time wasn’t crazy fast. I wanted to keep the rails up.”

He told us a bit about his 1st and 2nd place mounts, “Comtess is a mare that I’ve only had for two months. She is a great mare and came from a good stable in Europe. She is green, but I think she can jump the big grand prix. I’ve had Easy Girl for one year and she has jumped consistently in the grand prix classes.”

Lambre also commented on his experience at World Equestrian Center – Ocala, “It’s good to get experience under the lights at the 1.50m height. It is a great place for the horses to learn and get ready for the 5* next year. Easy Girl can be spooky under the lights, but she’s learning and gaining experience here. I think that the stadium here is even more impressive than Wellington. I have a horse in Wellington that I jumped the 5* on last week and I would like to have him here. The stadium and the jumps at World Equestrian Center are something like you would see in the Olympic Games. The best place to train my horse for the Olympics is here.”

He added, “I was in Europe for 15 years and I think that this is the best facility in the world. There is nothing like this. I’ve jumped in every country in Europe and I know all of the shows, I’ve jumped in South America and Canada, and I can say that this is the best place in the world. I came to show for one week and this is, now, my sixth week here. I have my barn and my house in Wellington and I am here because I like it so much.”

We would like to extend a special thank you to our sponsors supporting both the LPGA and World Equestrian Center – Ocala this week including Agricon Kubota Superstore, Cheney Brothers, Lugano Diamonds, MidFlorida Credit Union, Mirimichi Green and Ocala Regional Medical Center.

The WEC Grand Arena also hosted the $7,500 Futures Prix this morning. Sixteen entries contested the 1.40m track with five jumping double clear, but none could best Izzy Beisel and David Beisel’s Ammeretto (Numero Uno x Ranna), who set a pace early on in the class that proved unbeatable.

Izzy Beisel and the 15-year-old Dutch Warmblood stallion have been strong competitors in the futures prix classes over the past two weeks, earning 2nd and 5th place, and were determined to win this afternoon. The pair took to the course near the top of the order, jumping a clear first round in 73.655 seconds, well under the time allowed of 77 seconds. They continued straight to the jump-off, choosing a challenging inside approach to fence 15 that shaved crucial seconds off of their time. Beisel and Ammeretto galloped through the timers at 34.340 seconds with all rails up, moving to the top of the leaderboard and ultimately winning the class.

While Beisel and Ameretto took the blue ribbon by two seconds, the remaining four double clear entries saw a tight race for their ribbons. Morgan Ward and Jenni Hebel’s Levin (Cappucino x Sussi) laid down an impressive round late in the order. The 9-year-old Belgian Warmblood gelding has taken several top placings in the 1.10-1.15m jumpers with Paige Hamilton throughout the World Equestrian Center – Ocala Winter Spectacular, and Ward had the ride today. The duo managed one of the fastest first rounds of the class in 71.568 seconds before advancing straight to the jump-off. They mirrored Beisel’s inside track and kept a forward pace throughout the course, stopping the clock at 36.334 seconds for 2nd place.

Rounding out the top three finishers were David Cameron and Wellington Grey Goose. The duo earned 5th place in this week’s $10,000 1.40m Jumper Classic at World Equestrian Center, preparing them well for this morning’s class. Cameron and Wellington Grey Goose were also quick in the first round, jumping clear in 71.908 seconds. They continued straight to the jump-off, choosing to stay out to fence 15. Their pace across the ground made up for the longer track as the pair crossed the timers at 36.460 seconds, landing them in 3rd place.

Beisel took a moment to chat with us about her win and her plan on the short course, “Ammeretto was great today. It was funny because, when we were walking the course, my dad told me that he would likely be cantering on the wrong lead and bucking heading to the first fence in the jump-off, and, sure enough, he was. He ended up deciding to canter on the right lead, which was nice. He’s a smart horse, he knows which way he might be turning after a jump, so he ducked right after the first fence. I saw the distance right away to 14, then we went inside to 15. We didn’t want to have the skinny down, because we had it down last week. We planned for one, five, and seven strides through the combination and to the final two fences, but we ended up doing six strides to the last fence. He was really good.”

She also commented on Ammeretto’s signature accessory, “I want to add that Ammeretto got a fresh coat of silver and gold Twinkle Toes on his hooves today, which is always good luck!”