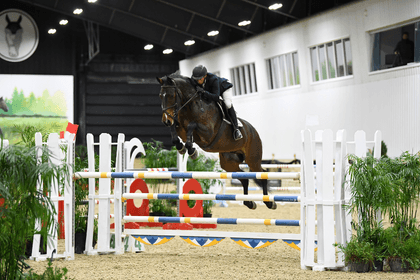 Wilmington, Ohio – The $10,000 WEC – Wilmington Welcome Stake took center stage in the Sanctuary Arena as a field of 18 horse-and-rider combinations kicked off feature competition during the second week of Midwest Indoors. Michael Burnett prevailed aboard his heart horse Chagrand, topping the impressive field of competitors for the win.

Keith Bollotte (USA) set an 11-obstacle first round track that asked technical questions of the group of riders. Bollotte included both oxers and verticals that came up quickly out of the turns. These elements challenged riders to maintain a balanced, adjustable canter in order to land and gallop up to the related distances in the bending lines. Of the 12 riders to advance to the jump-off phase, only six jumped double clear rounds. The jump-off presented riders with three opportunities to make tight inside turns. The top three on the podium choose the long route around the corner from fence 6 to fence 7, both wide oxers. Ultimately, this decision secured their positions on the leaderboard as they left all the rails intact and shaved precious seconds off the clock by opting for a gallop around the short turn.

Richard Rinehart was the first to go in the order, immediately setting the tone for the rest of the class. Rinehart of Rinehart Farm in Westfield, Indiana piloted Ron Caraways Vincent to an effortless double clear round, crossing through the timers in 38.050 seconds to ultimately secure the third-place finish. The duo jumped around the Sanctuary with confidence just coming off their win last week in the $30,000 WEC-Wilmington Grand Prix at Midwest Indoors I. They held an impressive lead until the last two pairs came to try their hand at the track.

Burnett of Burnett Farms in Lebanon, Indiana and his very own Chagrand were second to last in the order, hoping to take over the top spot. The duo jumped a clear first round and headed into the jump-off looking to give Reinhart a run for his money. The 13-year-old gelding posted an effortless, unbeatable round as he galloped through each inside turn and was quick and careful at the base of each obstacle.

Burnett left out one stride in the first inside turn, giving Chagrand a gap off the ground and setting them up for a speedy round. They galloped through the timers in a blazing fast time of 37.494 seconds to take the lead. “He [Chagrand] is my heart horse. His barn name is Charlie, and he is the best horse that I have ever ridden. I bought him from an incredible trainer who I learned a lot from and he is incredibly special to me.”

Charlotte Clark and her longtime partner, Kinsella, were the last to go. The pair is a force to be reckoned with as they have claimed numerous wins at World Equestrian Center – Wilmington in both the WEC Welcome Stakes and WEC Grands Prix. Exhibitors alike flocked to the stands in an attentive manor as Clark of Kendalwood Farm in Columbus, Ohio jumped a clear first round and moved onto the short course. Though the duo was quick and careful mirroring Burnetts track, they were just shy of the winning time, landing through the timers in 37.517 seconds to secure their second-place position on the podium.