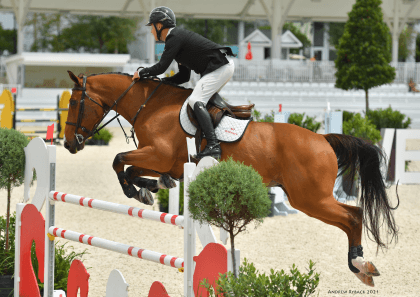 Week VI of the World Equestrian Center – Ocala Summer Series wrapped up this Sunday afternoon with the $15,000 WEC Ocala 1.40m Jumper Classic. A field of 15 horse-and-rider combinations challenged a course built by FEI Level IV course designer, Alan Wade of Ireland. The course presented a winding track that included a double combination and a triple combination. Six entries managed a clean first round and three jumped double clear, but it was Olympian Sharn Wordley of New Zealand and Casper that captured the win.

New Zealand’s Sharn Wordley and Casper (Contender x Falubet) delivered a lovely first round easily clearing every fence in the ring to stop the clock at 68.617 seconds. Wordley really enjoyed the courses this week, “The first course rode great. We are so fortunate to compete in one of the best rings in the world with beautiful jumps and have the best course designer in the world building this week.”

Wordley and the 15-year-old Oldenburg gelding advanced straight to the jump-off. “I know that the rider in second place did eight strides to the double combination, but I am just getting back into the groove of it, so I went a bit wider and did nine strides. In the roll back [from the Kentucky Performance Products fence to the World Equestrian Center Skinny] is where I ended up making up the time doing two less strides than other riders.”

Wordley and Casper flew through the rest of the course leaving every rail up to stop the clock at 35.168 seconds.

Just behind Wordley and Casper was Gabriel De Matos Machado and Raylyn Farms, Inc.’s RF Casablanca (Cosido x Winnie II). Machado and the 11-year-old Holsteiner mare delivered a smooth and fast first round stopping the clock at 65.331 seconds, well under the time allowed of 79 seconds. The pair jumped-off immediately taking tidy inside turns to stop the timers at 35.803 seconds to earn second place.

Benjamin Meredith and North Peak Farms LLC’s Quinka (Quintero x Inken I) jumped a flawless first round jumping to the top of the standards to stop the clock at 67.719 seconds. Meredith and the 12-year-old Holsteiner mare advanced straight to the jump-off, galloping down the lines and leaving out strides to stop the timers at 36.064 seconds to round out the top three. Meredith also received tenth place on his second mount Nichole HPF.

Maddrix and her fairly new mount Miss Uno (Numero Uno x Untouchable R) delivered a fast and clean first round relatively early in the order, stopping the clock at 71.046 seconds, well under the time allowed of 78 seconds. Maddrix really enjoys riding the speedy mare, “She has so much heart and you can tell how much she enjoys her job which always makes for a great ride.”

Maddrix and the 11-year-old Irish Sport Horse mare advanced to the jump-off immediately, rolling through the course with a nice gallop. “When I want to go fast with her, I jump the jumps and let her take me to the next one. She does super on a nice gallop where I can stay in a light two-point and point her to the next fence. Once I get there, I can adjust but when she trusts me, she flies.”

The pair soared through the finish to stop the clock at 31.269 seconds to earn first place. Maddrix also had another double clear round on her second mount Skyfall. Maddrix and Skyfall the 12-year-old Dutch Warmblood gelding produced fast rounds that ultimately earned them fourth.

Right behind Maddrix and Miss Uno, was Chloe Reid and Crossover 4. Reid and the eight-year-old Hanoverian gelding delivered a very fast and clean first round, stopping the timers at 69.821 seconds. Reid and Crossover 4 (Cascadello x Chakira) jumped-off immediately, taking tight inside turns to gallop to the last fence to stop the clock at 31.497 seconds, just behind Maddrix and Miss Uno, earning the pair second place.

The third place finishers, Kris Killam and his own Exclusive Demeter were the next double clear pair to try and contest Maddrix and Miss Uno’s time. Killam and the 12-year-old Danish Warmblood gelding jumped a smooth and clean first round, stopping the clock at 71.259 seconds. Killam and Exclusive Demeter (Diamant De Revel x Lexandra D) advanced straight to the jump-off flying through the course on a straight gallop to stop the clock at 31.760 seconds, to round out the top three.