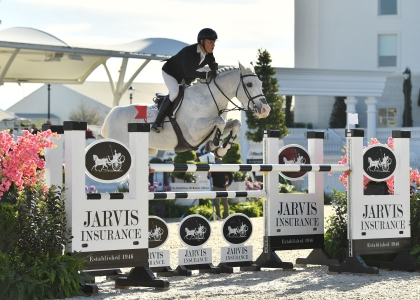 Wordley and Gatsby have won numerous World Equestrian Center – Ocala Grands Prix. “This will be my fifth year with Gatsby. I have known the horse since he was young. My great friends Andrew and Richard Bourns purchased him a long time ago. I watched the horse win the Quebec Original World Cup qualifying event at the Bromont Olympic Equestrian Park with Andrew. He has always been an amazing horse.”

Wordley and Gatsby delivered a fast, faultless round securing the class’s highest first-round time of 70.435 seconds, well within the time allowed of 76 seconds. Wordley and the 18-year-old Irish Sport Horse stallion advanced straight to the jump-off, galloping from fence one to two in nine strides to bend to the C. Jarvis Insurance double combination in seven strides. Wordley and Gatsby landed left and flew to the five stride line to roll right back to the MARS Equestrian vertical. The pair soared home, flying over the last oxer to stop the jump-off clock at 36.523 seconds to earn first.

“This is Gatsby’s first show back since Summer Series. He’s 18-years-old now, and I made the decision last year to only show Gatsby at WEC because the footing is incredible, and he loves the atmosphere. I would say that he knows the Grand Arena really well at this point. I am excited to do the Grand Prix this Saturday night, he knows when it’s his time to shine,” said Wordley.

Austria’s Peter Petschenig and his own Its The Senator 111 (Der Senaat 111 x Babs Van Het Sluishof) secured the second fastest jump-off time in today’s $20,000 C. Jarvis Welcome Prix. Petschenig and the 14-year-old Belgian Warmblood gelding produced a smooth first round, soaring to the top of the standards of each fence to stop the clock at 75.941 seconds, just within the time allowed of 76 seconds. The pair advanced to the jump-off taking tidy inside turns while galloping through the bending lines to halt the timers at 37.208 seconds.