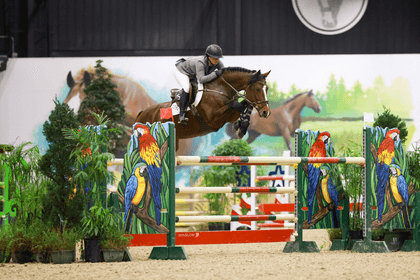 Wilmington, Ohio – The grand Sanctuary Arena played host to top jumper athletes Saturday evening for the penultimate day of feature competition of Winter Classic #6 of the Winter in the Midwest Series. Exhibitors flocked to the stands for the $30,000 Grand Prix at World Equestrian Center – Wilmington as riders tried their hand at Robert Barton’s (USA) towering track. However, none silenced the crowd like Nicole Loochtan (USA) and It’s Me Du Bosquetiau (Dayton Sitte x Mirette Du Bosquetiau) as they soared to the win in the highly anticipated class.

Barton’s track proved to be incredibly technical for the field of horse-and-athlete combinations as only three of the 15 starters moved onto the jump-off phase. The challenging track featured multiple short turns to wide oxers, three gymnastic elements and a tight time allowed of 85 seconds. Many athletes fell victim to fence nine, a wide oxer and a Liverpool that showed up quickly out of the turn, heading away from the in gate. Later in the track, elements 11A-B featuring a towering oxer in and a delicate vertical out saw many four fault scores.

Loochtan of Stone Creek Stables in Lexington, Kentucky, and her mount negotiated the difficulty of the track with ease, yielding an effortless double clear. Entering as the second to last to go aboard her brand-new mount, It’s Me Du Bosquetiau, the young professional looked to find her place in the jump-off and proved to be unbeatable.

Returning as the final pair in the jump-off to find their path to victory, Loochtan needed to secure a quick and clear round to best her fierce competitor Kevin McCarthy (IRE). Despite only being paired together for nearly two months, Loochtan left the crowd in silence as she guided her very own nine-year-old Belgian Sport Horse stallion to a jaw dropping jump-off round. The pair secured the win in 45.822 seconds and set the tone for a tremendous future ahead.

“Marvin [It’s Me Du Bosquetiau] is the best horse in the world. This is only my second week showing him. I spent a month with him in quarantine over at Spy Coast Farm and I got to know him a little bit. We brought him right up here and he has been double clear in every class he has been entered in. He was fourth in both the Welcome and the Grand Prix last week at Winter Classic #5. I am really looking forward to the future with him,” shared Loochtan on her talented stallion.

Claiming an impressive second place in the competitive class was Kevin McCarthy of Lexington, Kentucky, and Sweet Oak Farm’s Jadina (Canabis Z x Tordina). The nine-year-old KWPN mare stepped up to her first ever grand prix last week at Winter Classic #5 and was in top form for this evenings class. With McCarthy in the irons, the young mare showcased her amazing talent and was nothing short of perfection. The duo laid down two smooth, confident rounds, never touching a rail. However, two unlucky time faults in the jump-off set the pair just behind Loochtan. Stopping the clock in 49.801 seconds, the duo earned the red ribbon.

Izzy Beisel (USA), winner of Thursday’s $10,000 Welcome Stake, returned with her top mount Diaz Barbotiere (Messire Ardent x Quambera Barbotiere) for the $30,000 Grand Prix. As the first pair to try their hand at Barton’s 12-obstacle first-round track, they set the pace for the field of athletes with an immediate clear round. Beisel, training out of David Beisel Stables, was the first to return for the jump-off aboard her 10-year-old Selle Francias gelding. The duo negotiated the fastest jump-off time of 41.051 seconds, but one unlucky rail landed them in third place.

WEC – Wilmington sponsor Vitalize presented the Blazin’ Fastest Four Faulter $1,000 bonus in the $30,000 WEC Grand Prix to Megan Bash and Jackson VDL, who earned 81.805 seconds in the first round, finishing fifth in the class overall.

A field of developing horses and partnerships met early in the evening for the $10,000 Futures Prix to kick off Saturday’s jumper competition for Winter Classic #6. Junior Luke Rinehart (USA) and Captain America posted the sole double clear effort to take the win over Robert Barton’s (USA) track, besting many talented horse-and-rider combinations.

Rinehart, training with his father out of Rinehart Farm in Westfield, Indiana, proved unbeatable after delivering the only double clear round of the class against a field of nearly all professional athletes. The fierce junior rider piloted Captain America to a perfectly accurate first round track, moving immediately into the jump-off phase.

The nine-year-old Hanoverian gelding has been a part of the Rinehart family since he was a foal, and has worked his way up the ranks in the open jumper classes.

“My dad wanted me to leave out and do six strides up the first line, but I did not jump in the way that I wanted to, so I steadied and did seven. It was huge oxer off the turn, so I didn’t want to run at that. I made a few tidy turns, so I kept it in the middle of going fast and just leaving all the rails up,” Rinehart spoke on his jump-off.

Rinehart, who recently stepped up to the 1.30m level of competition, moved into the second phase of competition looking to earn his first win tonight in the $10,000 Futures Prix. Sticking to his plan over the technical track and galloping through the timers in 37.787 seconds to snag the win, the gifted young rider proved he is a force to be reckoned with in the jumper ring.