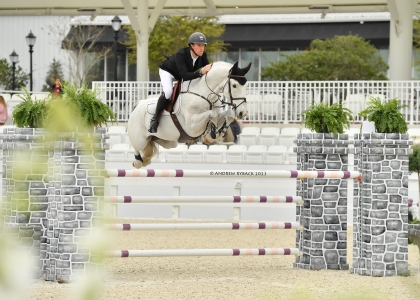 A welcoming first round track allowed 14 entries to jump clear. Of the 14, ten yielded a double-clean effort.

Jelmer Hoekstra was the second athlete to qualify for Lima’s short track, with the jump-off time set by pathfinder Bryn Salder and Showcase 81, LLC’s Cezarro in 37.390 seconds.

Hoekstra piloted the scopey 11-year-old KWPN gelding to his first clean round. “Harold just arrived after Christmas. He is owned by Niels Haesen and Andrew Vaziri. He’s such a fighter and is such a naturally fast horse,” Hoekstra shared.

“He won the 1.20m and then the 1.30m, then I showed him once in a 1.35m. Now he’s just won this class. He’s a true athlete and such a nice horse. Throughout the entire ride today, he felt safe, confident and so strong. I am very thankful to be able to ride him,” said Hoekstra.

The speedy pair advanced straight to the short course, “I knew I could go fast with Harold. He is very experienced in the jump-offs and is fast off the ground. So I just tried to stay tidy in the turns and find everything forward.”

Hoekstra and Harold flew around the track to find a blistering fast time of 34.782 seconds, which proved uncatchable for the rest of the field.

“I think I had the time, when I did nine up the first line. Most riders were doing the ten, but both of my horses have a big step, so I think that’s what set us apart,” explained Hoekstra.

Hoekstra put in another clean effort later in the order aboard his own eight-year-old KWPN mare K-One PGO (F-One USA x Odessa) ultimately securing fourth place. “I have owned her since she was a foal, and developed her up through the ranks. She just came over from Europe, so she is still getting back into top form. She felt amazing in the first round and I am excited to get her into the bigger classes soon.”

Hoekstra is enthusiastic about competing at the WEC Ocala venue, “I am so thrilled to be here. We are unbelievably lucky to have such an incredible facility like this. I am looking forward to the rest of the circuit here.”

On Friday afternoon, the $15,000 1.40m Jumper Classic was the feature event in the WEC Grand Arena as 19 horse-and-rider combinations vied for the top prize over a challenging track built by Anderson Lima (BRA). Lisa Goldman-Smolen and Barbara Disko’s Sovereign (Frontal x Galledent) snagged the victory and galloped away with the champion title.

Eleven of the 19 entries delivered a clean first round and went straight to the jump-off. Competition was fierce over the short course with the top three spots beings being separated by less than a second.

Goldman-Smolen and the 14-year-old Selle Francais stallion found a textbook first round well under the time allowed in 70.856 seconds to qualify for the jump-off.

The pair jumped-off immediately finding each fence on a forward gallop and yielding tight turns to stop the jump-off clock at 39.625 seconds for the win.

Stefanie Collier and Fernando Comune’s Caretoo (Catoo x Felina IV) were just behind Goldman-Smolen. Collier and the 11-year-old gelding put forth a stellar effort in the jump-off stopping the clock just seven hundredths of a second behind the winning pair in 39.696 seconds.

Alexanne Thibault and her own Cidanos Z secured the third fastest time in the $15,000 1.40m Jumper Classic. Just last week, Thibault and Cidanos Z galloped away with the victory in the $15,000 Buckeye Nutrition Futures Prix. The pair continued their success on Friday, after finding a very quick track in the jump-off in 39.952 seconds to round out the top three.