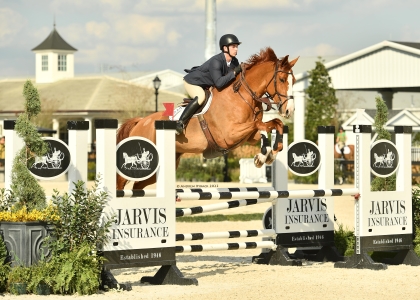 This week’s Ocala Sunday Spotlight shines on Jack Lube of Orlando, Florida. Jack was a competitive junior rider in his past where he was successful in the junior hunters and equitation. Jack took a five-year break from riding to focus on his studies, but now he is back and ready to move up. We caught up with Jack to ask about his junior career and future goals.

I was very competitive as a junior rider. I rode with, and still ride with Jamie Stryker. I was a working student at the time where I showed in the equitation and junior hunters.

I’ve never owned a horse. My trainer Jamie had allowed me to show and ride some of his sale horse. I was able to show at Devon in the junior hunter finals. I also made it to Mclay regionals, but I stopped riding right before the finals.

I grew out of the sport for a little when I started college. So, I focused on my studies to determine what I wanted to do as a career. I recently decided to apply for nursing school, which I am very excited about. This past summer I was really missing the sport. It was such a big part of my life, and I didn’t like not having horses in my life. So, I started riding more and more with Jamie again.

WEC: Was WEC your first horse show back?

Yes! I started during Week IV for the Winter Series. I rode an adorable hunter mare named Quanita who is owned by the Church Family. I showed her in the Adult Hunter Division where we got second out of a large class. She is a lot of fun to ride and moves beautifully.

I’ve been showing a big chestnut horse named Cool Ranch in the jumpers. We have done the 1m and 1.10m. He has been a blast to ride. I am liking the jumper ring more than the hunter ring.

WEC: Were you excited to show again?

I couldn’t wait to get back into the show ring. After riding a bunch this past summer, I was very eager to show again and be competitive. As a junior, it was a lot of pressure and now that I am back in it, I am just excited to have the opportunity to ride and compete.

I surprisingly wasn’t nervous at all. I think I was so eager, that my excitement trumped the nervousness. Now, I just go into the ring to have good rounds and have a great time.

Thank you, Jack, for catching up with us! We wish you all the best and we can’t wait to have you back in the summer.