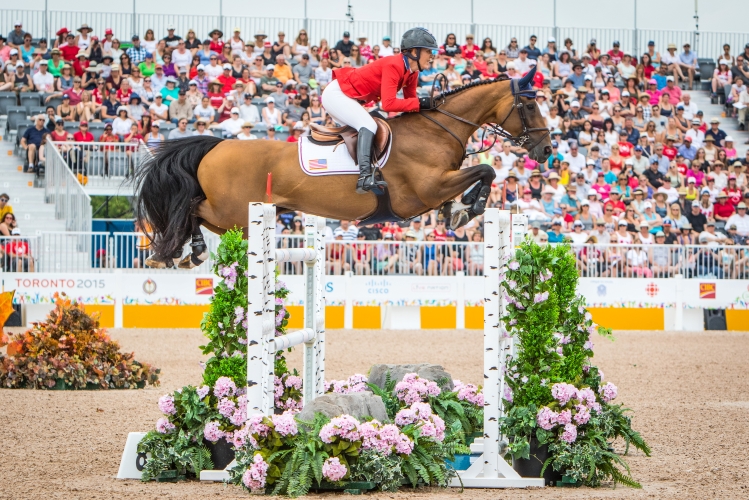 This week’s Ocala Sunday Spotlight shines on three-time Pan American medalist and Team USA Olympic rider Lauren Hough. Hough’s extended list of successes began early, earning numerous championships in the hunter, jumper and equitation rings as a junior rider. From then on, she represented the USA at seven FEI World Cup Finals, the Olympics in Sydney, Australia, over 40 Nations Cup appearances and winning three medals at the Pan American Games. We got the chance to sit down with Hough and learn more about her astonishing career.

WEC: Tell us when it all began.

I grew up in Morgan Hill, California. I began riding before I could walk because my family was involved in the industry.

I represented the United States at the Olympics when I was 23 years old in Sydney, Australia. I have been to numerous World Championships and earned medals in three Pan American Games.

For a large part of my career, I have been based in Europe in the Spring, Summer and Fall, then would spend the winters in Florida. Since the pandemic began, I have decided to stay closer to home. The Summer Series at World Equestrian Center – Ocala presented itself and we thought we would come experience all of this.

WEC: Tell us about the horses that you brought with you to World Equestrian Center – Ocala.

Currently, I have a very small group of horses. I am focused primarily on sale horses, but I do teach a few students. I decided to downsize about three or four months ago. I got tired of traveling and being on the road non-stop, so I took advantage of this opportunity and came to show here.

I have one student with me that is competing in the 1.20m Jumpers. I also brought a few young ones and sale horses. This has been a great fit for me this Summer and we have really enjoyed it.

WEC: What has your experience been at World Equestrian Center – Ocala?

Everyone has spoken so highly about the facility and the shows here. I never had the opportunity to be able to get over here in the winter, so when I found out that the summer shows were nationally rated, I thought it would be the perfect time to come see the facility in motion.

It’s been an amazing experience. Everyone has been super kind and friendly. All the rings are fantastic. It’s been hot, but you have the opportunity to get away from the heat with the air conditioned indoors and the stabling is very nice. I have been to other horse shows on the east coast this Summer and there was no place to escape from the heat, so it’s so amazing to be able to hack out in the nice cool indoors.

We have enjoyed our time here very much. I could definitely see us coming back for the Fall Series and for a portion of the winter series.

WEC: Tell us about one of your favorite horse’s that you’ve competed.

All the horses that I have been able to jump at the top level have all brought something to the table for me. Most recently, I had a little mare Ohlala, who was about 15.2hh. She jumped Pan American Games and Nations Cups all over the world. She ended up gaining a big fan following because of her size. Ohlala had no idea she was small, because she had the same scope and determination as any other horse.

I always tell young athletes that are emerging in the sport, you do it because you love the horses. I love all the horses that I have ridden. They all give a lesson to be learned. Even the bad ones, teach you patience or something else at the end of the day. I am always intrigued and amazed to see what these horses do for us.

WEC: Do you have a favorite memory?

That is a tricky question! I have so many fond memories. I would say a memory that stands out to me right now, was in 2000 when I made the Olympic team. It was a completely objective way to get there. We had to jump ten trials over a two- or three-month span and I remember jumping the last fence in the final trail. Right then, I knew I had earned my spot on the Olympic team. I don’t think I appreciated that moment back then, but now I look back knowing that I earned that spot and I belonged there.

Thank you, Lauren, for taking the time to chat with us! We hope to see you back at World Equestrian Center – Ocala soon!