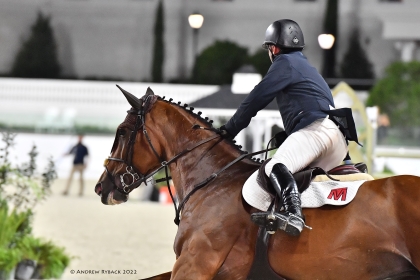 The finale of the 2022 USEF Summer Series at World Equestrian Center – Ocala came to a thrilling close with a competitive nine horse jump-off. Watch Todd Minikus and Hector Florentino race head-to-head for the final victory of the 2022 Summer Series.

“Right off the bat, it was an extremely fast jump-off. It was such a wide-open course, there weren’t any options, but to be as fast as possible. It was step on the gas pedal and tap the brakes only once or twice type of track. Then for the rest, you just have to see what happens.”

“I wanted to win,” laughed Goncalves. “He is so careful and brave. I knew I could take a few risks because I trust him. He’s a very competitive horse that wants to win with you.”

“The course rode really well. I was able to ride the lines in the smaller derby earlier today, so I had a nice feel for it. There were a few more interesting jumps, like the hay bale with the copper topped standards. It was perfect for the last derby.”

Harold Chopping and Light My Fire MD were on fire in the $10,000 WEC Ocala 3’ Open Hunter Derby.

“He’s a wonderful six-year-old that was recently imported from Belgium. He’s been showing here for the past three weeks and has been in the ribbons each time. He was fifth or sixth the first week, second last week and won this week. He’s very consistent. His best trait is that he doesn’t make mistakes. He just goes in and is more impressive each time.”

“We have had PS Call Me since she was a foal. We bred her when she was young and now we have one of her babies. Tina [PS Call Me] is an incredible mare. This is actually her first derby ever, so she is already off to a great start.”

“I was able to watch other competitors in the jump-off and I had already been in the jump-off with my other horse [Cetano Van Aspergem Z],but had a rail at the combination. I watched the current leader, [Juan M Gallego Martinez] and he was very fast, so I knew I had to take all of the risks,” said Lambre. “Dingeman is very careful through the combinations, so I knew I could be fast there, and he was quick everywhere else.”

“Camino Imperio Egipcio is a fantastic horse. He has competed through the four-star level. I like put the horses in easier classes so they gain confidence and have an enjoyable experience.”

Tarrin Kirby and her own Rasgo LS were victorious in the $3,500 WEC Ocala 2’6” Non Pro Hunter Derby.

Congratulations to all competitors on a success Summer Series! We hope to see you all soon for the 2022 Fall Show Series and 2023 Winter Spectacular Show Series.