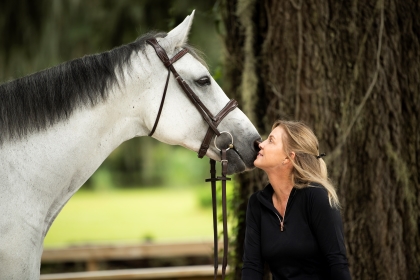 Ocala, FL – This week’s Ocala Sunday Spotlight shines on a World Equestrian Center – Ocala fan-favorite MTM Apple. Owned by Tracy Fenney and Mike McCormick of MTM Farm, ‘Apple’ has been a force to be reckoned with since the inaugural hunter/jumper show at World Equestrian Center – Ocala in 2021. Just this week, Fenney and the infamous Apple won the $24,000 C. Jarvis Insurance Welcome Prix and $100,000 Hampton Green Farms Grand Prix. MTM Apple is a horse that spectators seek out for her unique look and surprising speed. Don’t judge a book by its cover, because MTM Apple has a surprise in store for the jump-off.

WEC: Tell us how you found Apple.

Mike and I went to Norway to look at some horses. We had bought a couple from this seller before, but he was a big tough intimidating guy. There wasn’t much talking involved. He pulled out Apple who was seven at the time, and they popped her over a few jumps. I hopped right on and had a blast. After that we flew her into Chicago where she quarantined, then came straight to the Balmoral Horse Show. I showed her in one or two 1.30m classes and she was perfect. She was so straight forward and had a winner mindset.

After that show we were traveling to Saugerties, so we sent her home to get acclimated, but she coliced and needed surgery. She was off for a long time, but when she was healthy and fit enough, she bounced back. We were doing grands prix during her eight-year-old year – it was unbelievable. She snapped right back into top form and started winning.

WEC: Tell us a bit about Apple.

Well, everyone likes to make fun of her because she’s a big girl. I remember being at a horse show in Texas back in 2019, and there was this guy that we knew well, and he was a judge. We were the last to go in the grand prix and it was a very fast jump-off. He knew I liked to win and couldn’t fathom why we had this big ole mare going into the grand prix. He said there was no shot of her beating the other horses, but then she went in and flew around that course. We won the class by two full seconds. He was in disbelief. I think we ended up winning three grands prix during that series. A lot of people think she has no chance, but you can’t judge a book by its cover.

Apple has no quirks. She is the sweetest mare and just wants to be loved by everyone. In her paddock at the farm there is this tree that has a big low baring branch and it’s her scratching post. She goes out every single day and starts to scratch her entire body on this tree. She starts with her butt, then her neck and gets to her back. She moves all around the tree branch and gets every single spot. It’s hilarious. I always say if something happens to that tree we are in big trouble.

WEC: Has Apple always been so relaxed walking into the show ring?

She has always just walked into the show ring like she’s going on a Sunday stroll. She’s at total ease with herself, but when it comes to the jump-off she just kicks into a different gear. Her stride is enormous, and she has all the try in the world. Earlier this week, we ended up leaving out a stride during the first round of the welcome. I landed after doing six strides and knew we had just left one out without trying. She’s incredible.

She started this thing where she gets wild during the victory gallop. When she knows she’s won, she is ready to unload and go. Then she goes back to the barn to see her fans.

She loves it. She loves the Saturday night atmosphere here. She jumps so well, and her stride opens up to lengths I didn’t even know was possible.

She has a few fans that love to come and see her after the show. There is this sweet woman that comes after every class to give her treats and love. She brought her cousins today that are in town to see her and love on her.

I think the spectators might like her for her unique look and simple name. Then everyone goes crazy when she flies around the jump-off.

We just recently hosted a Christmas party at our farm. When you first walk in there is a giant chart with all the horse’s names on it. We have 30 on each side of the barn, one side for jumpers and one side for hunters, but right now we have a bit more hunters than jumpers. On the jumper side, it’s Mike’s horse Peanut first, then Apple. Aaron Vale scratched out Peanuts name and put Apple’s. He told me he fixed our board because there was no way Apple shouldn’t be first. We thought it was so cute and sweet.

WEC: Do you have a favorite memory with Apple?

Everyday is my favorite day with Apple. She makes me laugh when she’s out scratching on her branch and then she wins the grand prix a few hours later. She is the best. I think she was made for me.

Our partner in Europe says that we never have to sell her. She owes us nothing, she helps pay for all the hunters to show and be here, she’s like our own Apple Pay. He just wants Apple to have the best life and I am so grateful to have her.

Thank you for taking the time to chat with us Tracy. We are looking forward to seeing you and Apple this winter during the 2023 Winter Spectacular Show Series!