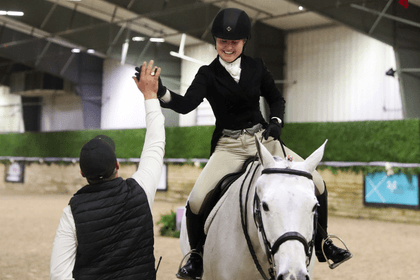 Wilmington, Ohio – December shows at World Equestrian Center – Wilmington came to a close Sunday, December 18. Winter Classic #3 featured many special classes, including the WEC Professional Medal, the $3,000 Gamblers Choice .90-1.00m and 1.05-1.15m, and the weekly $30,000 WEC Grand Prix. The winner’s circle welcomed several talented horse-and-athlete combinations as they etched their name in history during the action-packed week of elite competition.

Darby Pease of Windcrest Farm earned her third ever grand prix win aboard her top mount, Carel Van Donderen (Acolino x Terania Die Hoeghte) in the $30,000 WEC Grand Prix Saturday evening. The duo silenced the crowd in the Sanctuary as they returned for a thrilling jump-off and stepped on the gas pedal to take the win. The pair is a force to be reckoned with at World Equestrian Center – Wilmington as they have continuously proven their winning ways through the entire fall and winter series.

The $10,000 Voltaire Futures Prix saw Richard Rinehart and Captain America (Contendro) soar to the top of the leaderboard. Rinehart of Rinehart Farm in Westfield, Indiana, is experienced with the eight-year-old Hanoverian gelding, sharing the ride with his son, Luke Rinehart. The duo crossed through the timers in 34.150 seconds to claim another blue ribbon.

Earlier on Saturday afternoon, the $3,000 Gamblers Choice .90m-1.00m saw 17 horse-and-athlete combinations strategize for the win. Taylor Johnson of Brownsburg, Indiana, and Ace Of Spades (Diarado x Zarina XIV) executed their plan flawlessly to earn 1100 points, plus 200 points after clearing the Joker jump to take the win.

Pease earned another win on Saturday aboard Fenn (Eldorado Van De Zeshoek x Odin) in the $3,000 Gamblers Choice 1.05m-1.15m. Pease successfully jumped 14 obstacles in the first 60 seconds to earn 1190 points. The duo went on the clear the Joker jump to earn an extra 200 points to the original score to take the win.

Troy Hendricks, owner and trainer of Kimber-View Stables in Glenmoore, Pennsylvania, dominated the R+L Arena Friday afternoon aboard Confidant. Hendricks took home the win in the $15,000 USHJA National Open 3’ Hunter Derby on the 7-year-old Oldenburg gelding with scores of 87 and 86.

Alexa Bing and Subtil (Adelfos x Isba De B’ Neville) topped the $15,000 UHSJA National Non-Pro 3’ Hunter Derby. The duo was untouchable as they were the only pair to reach scores in the 90s, with a first-round score of 91 and handy round score of 94 to take top honors.

The WEC – Wilmington Professional Medal called all professional athletes to the R+L Arena early Friday afternoon to switch disciplines for the day. Twenty-two riders went head-to-head for the championship title, but none could best Sam Pegg of Ten Sixty Stables in Uxbridge, Ontario, Canada. He piloted Riece Locke’s Lord Quality to a textbook equitation round took and pristine flat phase to take the win.

Michael Burnett and Chagrand (Chacco-Blue x Centogrina) continued their winning ways Thursday evening in the Sanctuary. The competitive pair topped the field in the $10,000 WEC Welcome Stake. The 13-year-old Oldenburg gelding was nothing short of spectacular, making light work of the class and showcasing his unmatched scope and athleticism.

The $3,500 2’6 Non-Pro Derby took place Saturday in the R+L Annex Arena with Colleen Pettengill and Summit coming out on top.

Congratulations to all entries on a successful third week of the Winter in the Midwest Series! We look forward to having you back for Winter Classic #4 and wish everyone Happy Holidays!

Make sure to visit the for full coverage on all feature classes! Results can be found at HorseShowing.com.