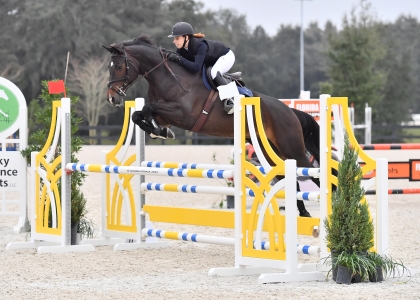 Ocala, FL – This week’s Ocala Sunday Spotlight shines on Zosia Mamet, a talent on screen and in the show ring. Zosia has been riding her entire life and has had a few amazing partnerships along the way. We caught up with her this week to learn more about her riding career and the horse that she has competing at World Equestrian Center – Ocala.

WEC: When did you first fall in love with riding?

I grew up in Vermont. Before I was even born, my parents bought my older sister a pony for Christmas. It was every little girl’s dream. It was a snowy day, and they took her to a barn to surprise her with a little Shetland pony named Tinsel. I think every little girl in the world dreams about a moment like that. My older sister liked riding, but didn’t love it.

When I was old enough, they would stick me on Tinsel while she was standing on cross ties, and my facial expression gave it all away. I was a goner from day one. I started riding with Judi Whipple when I was three. My little legs barely went past the saddle, but I had the biggest smile on my face in every single picture. I have been riding ever since.

WEC: Tell us about the horses that you have owned throughout your riding career.

I moved around a bit when I was young. I lived in Cambridge, Massachusetts until I was five, then we moved to Los Angeles. I bounced around a bunch of different barns and rode my entire childhood. When I was 12, I had an amazing trainer named Susan Demers. She was hilarious but stern. She ended up going to try some horses and saw a really pretty paint horse named Lucy. Lucy hated puddles and was about to go on a trail ride, she jumped the puddle so well, Susan bought her to make her a jumper.

Every person that rode Lucy would fall off. One day Susan asked if I wanted to ride her, and I said, ‘no thank you, I choose life’. I ended up getting on her anyway and we just clicked. I fell in love with her immediately and bought her.

I look back today thinking about the height that I jumped with that little mare. I was fearless! There was this competition in California called Fox Field and I ended up showing in a 4’ class like it was nothing. We didn’t show often, but when we did, I had a blast. Even though I didn’t show that much, I was at the barn six or seven days a week. As soon as I got my license, I would drive straight from Santa Monica to Malibu after school, then wouldn’t get home until it was dark. The barn was my favorite place to be.

I started working as an actress in my late teens and began getting roles in my early 20s. I ended up having to move to Manhattan and I wasn’t sure what I could do with Lucy in a big city, so I kept her in LA until I figured something out. I finally decided to bring her over and board her at Judi Whipple’s farm in Vermont, but after her travel she got very sick and passed. It crushed me. I owned her for 13 years and she taught me so much. I was so broken, I had to take a break for a while.

I didn’t ride for six years, but I felt like a part of me was missing. I missed horses and the sport so much. It was like a void inside of me. Once I started riding again, I felt whole again. I tried a bunch of barns, and finally found the right fit. I was riding at that barn for a year or so and decided I was ready to buy a horse. My poor husband met me while I was on my horse girl hiatus, so he was in for a rude awakening.

One day my trainer asked if I could go with her and a few clients to try horses. I had no intention of buying anything, I was just going to ride a bunch of horses. As soon as we walked into the sale barn, there she was, my dream horse. I had always wanted a dappled gray mare and she was standing right in front of me. It’s almost like the clouds parted and she was there. After riding a few horses for my trainer’s clients, I asked if I could hop on the gray mare, and they said of course. I galloped her around in a field and there was a single jump. I asked if she had ever jumped before, and they said we can find out. She jumped it so well. I knew I was a goner when another group of people came in to try horses. They asked if the gray mare was for sale and I said nope she’s taken.

I sent a picture to my husband, and he asked why I sent him a picture of a horse, but it was already too late. When she was at the sale barn, she didn’t have a name, but she was in stall ten, so I called her Ten. My intention was to use Ten until I thought of another name, but when I vetted her, the vet asked her name, and I said I had been calling her Ten. He told me the name was on the vet paper now, and I should just keep it. It suits her well.

I ended up having to go back to LA to film Flight Attendant with Kaley Cuoco. I told Kaley that I had Ten and she told me to bring her. The entire time I was there I had a blast. Kaley’s ranch is unbelievable, and the animals there have the best life imaginable.

Kaley had a horse there named Herbie. She got Herbie as a broodmare from a good friend of hers. She was a bit hot and a little opinionated and he was afraid that someone would try to box her up. So, he gave her to Kaley because he knew she would have an incredible life. Herbie didn’t end up taking as a broodmare and Kaley’s trainer Tracey Wade said the mare looked so bored. So, one day Tracey got on her and said Herbie knew the name of the game – go fast, leave them up.

While I was at Kaley’s, Tracey Wade told me I could ride Herbie and I fell in love. The connection was instant. Tracey and our good friend Stephanie Fanning came up with the idea to trade Ten for Herbie. Kaley’s mom loved Ten and her horse was getting old, so I agreed because I knew Ten was in the hands of the most amazing people.

WEC: Tell us about Herbie.

This is only my second show with her. I found an amazing trainer, Kris Di Carlo. His wife Renessa is the barn manager, and they take such great care of the horses. The vibe at the barn is great, everyone is so nice, it’s like a family environment.

We just showed recently starting in the .75m, then we moved up to .85m and then the next day we were doing the .95m. We got first and second at our first show. I was shocked, I was just going to have fun, I didn’t even try to win, but Herbie just loves the competition.

Once we came to WEC, we stepped up to the 1.0m. We had one rail Friday, but then got second on Saturday and got fourth in the Low Adult Jumper Classic. I feel like I won the lottery with this horse. She is so special, and I feel like I need to do right by her. I know she would do anything for me. I just want to enjoy her and have as much fun as I can.

WEC: Is this your first time at World Equestrian Center – Ocala?

Yes, and it is even more amazing than I imagined. I heard so much about WEC. I travel a lot, and almost everywhere I went someone asked if I had been to World Equestrian Center. Everyone raved about it and now that I am here, I know exactly why.

It’s so magical, it’s truly like Disney World, but for horse people. It’s like a horse girl snow globe. I am just in awe of the entire facility. The Roberts family thought of everything imaginable to make this place the best horse show facility in the country.

I am going to watch the grand prix tonight with my barn. I am so excited! We are going to get a pizza at Viola & Dot’s, then we are going to try and get our seats early.

To top it all off, I am staying at The Equestrian Hotel which is incredible. When I knew I was coming, I asked everyone where I should stay, and everyone told me I have to stay in the hotel. Once I saw the pictures I was sold. I walked in the doors and my jaw was on the floor. Then my room was arena facing! I was getting ready while watching the horses compete in the Grand Arena. All I kept thinking to myself is ‘how is this place even real’? I can’t wait to come back. I have had the most amazing experience and I wish I didn’t have to leave.

Thank you Zosia for taking the time to chat with us! We can’t wait to have you back and we wish you all the best with Herbie!