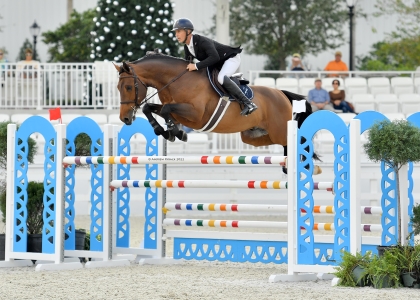 Ocala, FL – On Friday afternoon, 28 top-level athletes competed over a first-round track built by FEI Level IV course designer Bernardo Costa Cabral (POR) in the $15,000 Buckeye Nutrition Futures Prix. The first-round track proved to be challenging for many as only six went onto the jump-off, but the course was no match for Richard Spooner and Molly Ohrstrom’s Halcon.

Of the six clear riders only three managed to keep all rails up rails up in the jump-off.

Richard Spooner and the six-year-old Argentinian Sport Horse stallion entered the arena toward the end of the order. At that point, not one horse-and-rider combination managed to yield a clean jump-off round.

Spooner spoke about the intricate first round track, “Bernardo [Costa Cabral] is a wonderful course designer. I think he did a fantastic job with the time allowed in the first round. It was just tight enough to make the competitors take tighter turns and keep the pressure on,” said Spooner. “The jump-off was straight forward, but I think some riders took that for granted and went a little too fast which caused them to have rails down.”

Spooner and Halcon advanced straight to the jump-off with the hopes of a clear round. The pair soared around the track, not touching a single fence in an uncatchable 34.964 seconds.

Spooner spoke about the talented young stallion, “He’s if you dreamed up the perfect horse. He’s easy to ride and allergic to lumber. He’s incredibly brave, unbelievably elastic and has a hind end like a whip. It’s a rare combination. I think he’s going to be something very special, and I am so thankful to be able to produce such an astonishing horse.”

The second fastest jump-off was found by Bryn Sadler and Showcase 81, LLC’s Cezarro (Cesaro x Nabell). Sadler and the 14-year-old Brandenburg gelding started on a strong gallop to fence one after the tone. The pair soared around the track, taking tidy turns, and finding each fence right out of stride to stop the jump-off clock at 35.010 seconds.

Rowan Willis piloted his own and Bob Moore’s Cornet’s Girlensky to third place during Friday’s $15,000 Buckeye Nutrition Futures Prix. The pair produced an efficient jump-off in 37.181 seconds to round out the top three.

Fifteen-year-old Brooks Hull and Zechariah 3:9 entered the class toward the end of the order. Hull and the eight-year-old Dutch Warmblood gelding navigated an efficient first round in 71.438 seconds, well under the time allowed of 79 seconds.

Hull spoke about the challenging first round track that only allowed four to advance to the jump-off, “I was a tough course. There were a few lines that were pretty tight, but we ended up coming out with a plan and it worked out well,” said Brooks. “When I rolled back to the orange vertical, I caught it on a bit of an angle so I could bow out and move up to the double combination rather than pull.”

The pair advanced straight to the jump-off, “I knew there was only one horse that went double clear and they didn’t go inside from one to two, so I knew if I was able to do that inside turn, then I would be fine.”

Hull and Zechariah 3:9 soared around the remainder of the track stopping the clock at an uncatchable 30.998 seconds.

Second place was earned by Maya Denis and her own Jantien De Muze (Triomphe De Muze x Eejantien). Denis and the eight-year-old KWPN gelding produced a smooth first round in 74.731 seconds to qualify for the jump-off. The pair went straight to the short course taking tidy turns while leaving out strides to soar through the timers in 35.754 seconds.

Allen Nabors and Dutch Valley Sporthorse’s Master Clinton DVE (Clinton x Diona V/D Wezelse Heihoeve) rounded out the top three in this morning’s $10,000 1.40m Jumper Classic. Nabors and the ten-year-old Belgian Warmblood gelding found a clear first round in 75.180 seconds. The pair jumped-off immediately dashing around the track while leaving all rails up in 36.550 seconds.