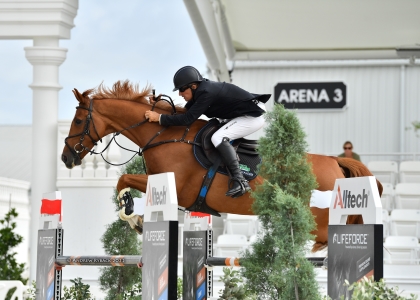 Vale was first on course with Condarco. “I thought I was pretty quick on Condarco, but by the time I went on Cristo Beech, I was down to third or fourth place, so I knew I had to be a bit more aggressive in my turns.”

Vale and the 11-year-old Warmblood gelding by Its The Business x Cantero cruised around the course in 59.85 seconds for the win.

Cristo Beech is a new mount for Vale, “I just started riding Cristo Beech this year, so we are still getting to know each other. This was a fantastic course for his confidence, it was nearly Grand Prix height and it allowed us to gallop. He was great with the turns and opened up his step really well,” expressed Vale.

Vale was excited to open FEI competition with a victory, “It is fantastic to have FEI competition here. The prize money is great and we gain world ranking points, which is very valuable. There were a lot of great competitors here today, so it was nice to get the win.”

In third place was Luis Larrazabal (VEN), who stopped the clock in 61.07 seconds aboard his own 13-year-old Irish Sport Horse stallion, Sligo Balou Boy (Balou Du Rouet x Caletto I).

The first FEI CSI3* competition of the day brought 17 international partnerships to the WEC Grand Arena to contest the $6,000 1.40m FEI CSI3* Speed. Guilherme Jorge of Brazil created the opening tracks that allowed ten entries to go clear, but it was Israel’s Alberto Michan that sealed the victory aboard his own Nabal De Trivera.

Michan and the 12-year-old Warmblood gelding by Nabab De Reve turned in the quickest trip of the class in 63.64 seconds, more than three seconds faster than second place.

Michan enjoyed Guilherme Jorge’s opening track, “The course was very inviting and allowed the horses to get to know the arena. Many competitors used the class as training, but my horse felt good, so I went a little faster than the rest.”

“Today marks the beginning of history at World Equestrian Center – Ocala. I can see some of the biggest show jumping events in the world happening here. The venue is by far the greatest in the country, in my opinion. Everyone is extremely friendly, and the facility is breathtaking. The horses love the stalls, and the facility is so pristine and clean, it’s wonderful,” Michan stated.

In second place was Kady Abrahamson (USA), who flew through the timers in 67.19 seconds aboard Any, a 14-year-old Holsteiner mare by Aliano x Acatraz.