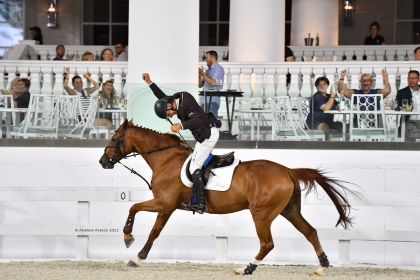 “I just brought him over from Europe. He is nine-years-old and has a lot of character. When I first got him, he was a bit too fast and green, but now he is really coming together.”

“You don’t get many jump-offs where you are stacking one on top of the other: fast, faster, fastest! It was great for the crowd.”

“The jump-off was a lot of fun to ride. I was able to leave out strides everywhere. I walked a ten to the last fence, but I was able to slice the vertical and go down in nine easily. The horse was amazing.”

“The two horses that I had coming back in the handy are very nimble, so I was able to make all of the inside turns that Doug gave us. It was a super fun course and Goodfella was perfect.”

Clair Kellner and Inspiration earned the highest overall score from the judges in the $10,000 WEC Ocala 3’ Open Hunter Derby.

“I have been riding him since he was four. He is an amazing horse and a total ham. He has a lot of character, and always tries for me.”

The $10,000 WEC Ocala 3’ Jr/Am Hunter Derby saw an impressive field of 29 entries compete for the victory, but none could best Lilly French and Douglas Wheeler’s Citation.

“I had two horses coming back for the handy, so I experimented on my first horse and found what I needed to change. I fixed my track to the first jump then after that I told myself to relax and stay patient.”

“I am very excited that WEC is hosting USEF and FEI competition. I will be here for the entire nine-week circuit. I have an exciting string of horses with me and a few new additions, so I am thrilled to have started on a strong note.”

On Friday evening, 17 impressive ponies took to the UF Health Arena 2 to contest the $2,000 WEC Ocala Pony/Children’s Pony Hunter Derby, but it was Adair Moses and her own Masquerade that earned a first-round score of 88 and a handy score of 82, for an overall score of 170 for the win.

The $3,000 Children’s Non Pro Hunter Derby saw 11 horse-and-rider combinations, but none could best Gabriella Rivera and her own Bon Chance.

Beth Ford Estey and her own Kodiak Harbor landed the $3,000 Adult Non Pro Hunter Derby on Saturday, earning an overall score of 161 from the judges.

Congratulations to all entries on a successful first week of equestrian sport at World Equestrian Center – Ocala!