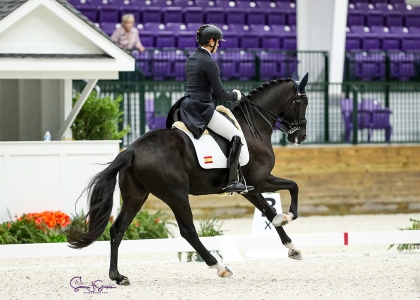 Ocala, Fla. – October 24, 2021 – In the final day of the World Equestrian Center Dressage IV show on Sunday, October 24, 2021, Pablo Gomez Molina (ESP) and Servus Ymas, owned by Cristina Danguillecourt, scored their second win of the week, this time in the Intermediate 1 Freestyle CDI3*. Competition for this CDI-W event wrapped up, but dressage returns to World Equestrian Center – Ocala on December 9-12, 2021.

Gomez Molina and Servus Ymas won the freestyle with a score of 74.750% in the CaptiveOne Advisors Arena. It was their first freestyle ever together in the horse’s first year in the Small Tour. Their music and choreography came from the freestyle that Gomez Molina rode with a previous horse, Furst Fiorano Ymas.

“We thought it could fit him well, and we are really happy with the way he behaved,” said Gomez Molina of the eight-year-old Hanoverian gelding by San Amour I. “He didn’t have any mistakes. It was the first time I’ve done the pattern all together and put the music with it on him. He was super. I’m really proud of him.”

Gomez Molina describes Servus Ymas as clever and thought riding in a freestyle would be a good experience for the young horse.

“We had a few new lines for him, so he was a little like, ‘What’s going on here?’” said Gomez Molina. “But he responded to me really well. I’m happy with that. When you prepare too much, he tries to do it for you. Sometimes when they do it for you, you miss a little bit of quality. They need to wait a little bit more for you.”

The plan is for Servus Ymas to move up to the grand prix level, but whether that is next year or the following year is to be determined. He remarked, “He’s super earnest in the ring, and he tries his heart out. It’s a real pleasure to ride and compete him.”

Second place went to Rebecca Waite (USA) and Beirholms Eclaire, owned by Mary Zorzit-Mattingly, who scored 67.500%. Megan Fischer-Graham (USA) and her own Elian were third with 60.792%.

For all results from the World Equestrian Center Dressage IV show, visit www.horseshowoffice.com/events.asp.