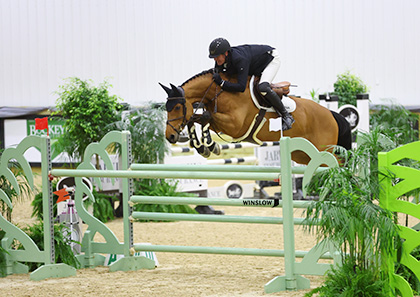 Wilmington, OHIO – Paul Halpern (CAN) and Vanessa Lee’s Esra laid down two foot-perfect, double-clear rounds to take top honors in the $30,000 WEC Grand Prix on Sunday, March 13. Competition commenced in the early morning as a field of seven competitors gathered in the Sanctuary Arena to contest the class, which featured serpentine style tracks set by FEI Level II course designer Joey Rycroft (CAN).

Fellow competitor David Beisel, injured in a fall yesterday, was at the forefront of Halpern’s post-ride thoughts. “I dedicate my ride this morning to David Beisel. It’s been an emotional 24-hours for all of us here as we wait for updates on David’s condition. I have known David for 20 years and he is the hometown hero here at WEC. If he were here competing, he would have made me work harder for the win. We are all wishing him the very best on his recovery.”

Halpern was also effusive in his praise for his partner Esra (Bratt Z x Ulibra), a 10-year-old Holsteiner mare. “I’ve been riding Esra since the beginning of her career. Her owner manages our stable. She is amazing. She’s just such a special mare. She’s quality, really smart and careful, she looks for the jumps. If I do the right thing in the saddle, she always gives 110%.”

Ultimately three horse and rider combinations went clear over the first round track to advance to the jump-off. It was student vs. master as Chloe Parker (CAN) qualified with her two mounts and went head-to-head over the short course against Halpern, whom she trains with in Canada.

Halpern went early in the order and produced a double-clear jump-off round, stopping the clock at 40.572. His strategy was to be conservative in his approach, but to go fast enough to put pressure on his student.

Halpern was complementary of Rycroft’s courses. “I love Joey’s courses, they are always fabulous. The course this morning was challenging in that while it wasn’t huge, the jumps came up quickly so you really had to ride.”

“I am extremely proud of Chloe and would have been proud of her if she beat me, but of course I was going to try and win,” said Halpern.

Parker rounded out the top three placings with Cornet S Lady (Cornet’s Stern x Candela), owned by Groupe Zacar Inc. Parker and the 11-year-old Oldenburg mare were clear in the first round with a time of 78.991. An unfortunate miscommunication kept the pair from completing the jump-off course.