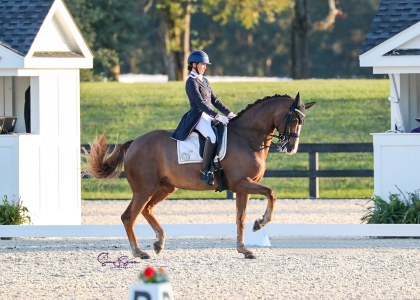 Ocala, Fla. – December 11, 2021 – While there were a variety of national and international classes at the World Equestrian Center (WEC) Dressage V CDI-W on Saturday, December 11, 2021, there were standout performances in the Grand Prix Special CDI3*, which awarded the top prize to Jessica Howington (USA) on Cavalia. The show wraps up competition on Sunday, December 12.

Howington and her own Cavalia performed a beautiful test, leading to a score of 74.468% and a personal best. Recording another personal best, Kerrigan Gluch (USA) and Mejorano HGF, owned by Hampton Green Farm, finished second with 70.106%. Alexandra Dominguez-Thomas (GUA) and her own Etanga were third with 68.787%.

As Howington and Cavalia exited the ring following their test, there were happy tears on the faces of many on her team, as well as on Howington’s.

“I knew when we halted that it was a good test,” expressed Howington. “She not only was just there for me but gave me that extra too. We didn’t have any mistakes. I was worried about that because we had mistakes in the canter work in the grand prix. We worked on that in the warm-up. Even if it was a low score, I was so happy with her. She was willing to work for me. She didn’t say no. It was my personal best too. I wasn’t expecting that score. When I saw it and heard it, I couldn’t help but tear up.”

Howington described her test as fluid and harmonious. “Today she really gave me almost everything that she has,” she added.

“My goal in an ideal world going into the winter season would hopefully be to get nothing less than 72%, just trying every ride to increase my score and rideability,” she noted. “I think this was a good end of the year. It raises the bar for her and me, to step it up even more than we have been.”

The 70+ score for Gluch and Mejorano HGF, a 10-year-old Pura Raza Espanola stallion by Grandioso, was also a personal best for the pair who has been working together for two years. While Mejorano HGF was very green at the grand prix when they started, Gluch said that the movements were very easy for the “talented little boy.”

“He was able to learn everything very fast,” she said. “We had to gain a relationship and polish everything and make it our own.”

This is only their second CDI together, and Gluch was very pleased with their improvement since the CDI in October at WEC. “He is a fantastic, super horse and to be able to show him off and enjoy it is really special,” she remarked. “I’ve been working really hard to get a happy, positive relationship with him, from grooming to turning out, everything, where he really knows me and knows our Hampton Green team, to make him as calm and happy as he can be.”

Gluch echoed the sentiments of many dressage riders at the event about the facility and the opportunity for competition in a new arena outdoors. Gluch is now based in Ocala and appreciated that the summer competitions were held in the climate-controlled indoor.

“It’s very close to home,” she confirmed. “We’ve never shown out here before, so it was like a whole different showground for us. With a newer horse and wanting to get him used to as many arenas as I can, this was really super.”

Hampton Green Farm is the Title Sponsor of the 2022 & 2023 Dressage Series at World Equestrian Center – Ocala.

Earlier in the day, Chloe Fullar (USA) repeated her winning small tour performance from the Prix St. Georges in the Intermediate 1 class. She and her own Farley 4, a 21-year-old Hanoverian gelding by Fabriano x Woodstock, took the top prize with a score of 74.468%. Eline Eckroth (USA) and Daphne, owned by Connie Wise, finished second with a score of 67.598%. Ivo Juhrend (NED) and Black Diamond, owned by Savannah Show Stables LLC, were third with 61.176%.