The vision is surreal, stark and raging – an experience that grips and shakes the human spirit. It is an image of four horses, white, red, black and pale. The horses of the Apocalypse carry riders – angelic, heavenly, horrific – symbolizing conquest, war, famine and death.

Even in eternal realms, the equine – the regal, galloping Equus ferus caballus – rides supreme across the landscape of human history. They are a proud, gentle, noble creature, establishing an ethereal bond with the two-legged species of Homo sapiens. Few other life forms on this terra firma have this powerful and majestic of a bond.

The Human-Horse Connection Began 3,000 Years Ago

Humans began domesticating this rugged species about 4,000 years ago and began using them for farming, travel and battle some 3,000 years ago.

We at World Equestrian Center (WEC), the largest indoor equine facility in the United States, take pride in exploring this animal, its relationship with humans and its setting in our history.

In 75 million B.C., the horse’s ancestor – the dog-sized five-toed Condylarth – lived in the early Eocene forests, according to sino-platonic.org. Some 20 million years later, the four-toed dawn horse (Hyracotherium) rose from earlier breeds.

Evidence of the Mesohippus was found in Colorado and the Great Plains dating to 32 million B.C. The Parahippus, a three-toed mix between browsers and grazers and about the size of a large dog, begins living in the Great Plains and Florida more than 17 million years ago. But it wasn’t until the period between 13 million and 5 million years ago that evidence of the closest relative to the modern horse, the Dinohippus, was found.

The first horses lived in North America and migrated to Asia and Europe, according to Scientific American. The remaining horses in the Americas became extinct about 10,000 years ago but were reintroduced to the continents by Europeans some 500 years ago. 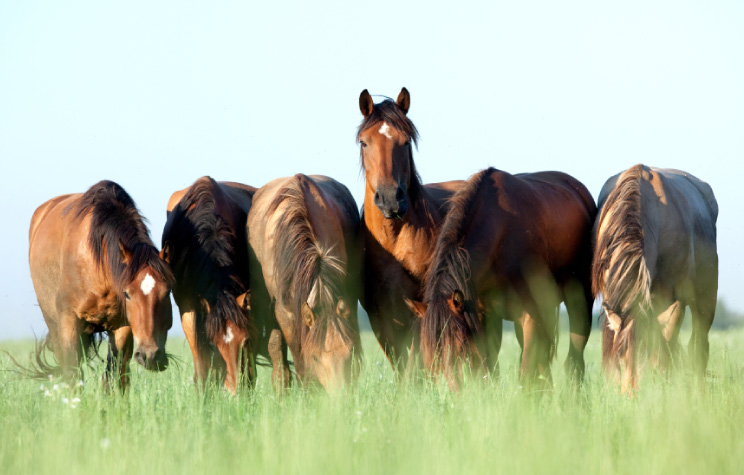 Here are some amazing horse facts from livescience.com: