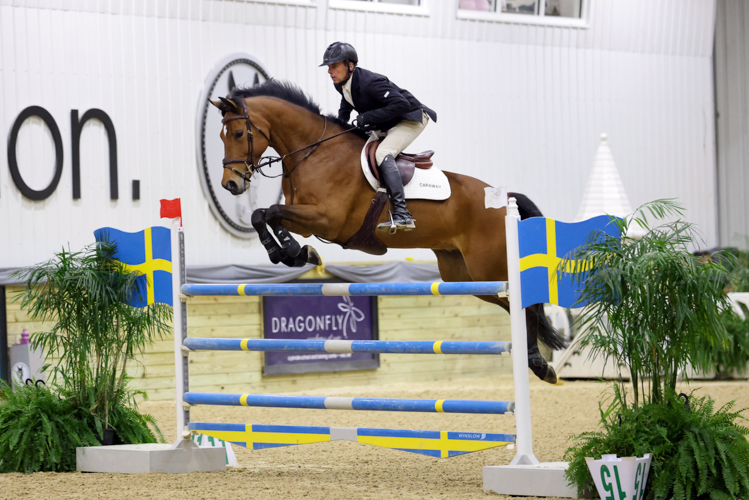 Wilmington, OH – Week XIV of the Winter Classic series closed out with the $30,000 World Equestrian Center Grand Prix. It was a full house for tonight’s event as the crowd cheered excitedly for their favorite athletes.

The tracks were built by Michael Pegg of Ontario, Canada, and featured a triple combination, a liverpool and a long approach to the final fence of the jump-off.Five riders made it out of the qualifying round and just two went double clear in the $30,000 WEC Grand Prix. As the last fence proved difficult for many, none could best Richard Rinehart and Vincent’s winning efforts.

We chatted ringside with tonight’s $30,000 Grand Prix champion. “Vincent is an extremely careful horse and that paid off for us today. I enjoyed the jump-off and the final jump was difficult. We slowed down for it, but thankfully we were fast enough earlier in the round so it didn’t cost us the win. Owner Ron Caraway is so supportive of this horse. He enjoys watching his show and is here to support him.”

Rinehart of Rinehart Farm in Westfield, Indiana, and Ron Caraway’s Vincent covered ground quickly throughout each course while remaining careful throughout. They posted a clear time of 79.384 seconds in round one, advancing them onto the short course. During their final round, Richard piloted the 10-year-old gelding precisely to cross the timers in 40.814 seconds, to ultimately win the class.

Rinehart went on to commemorate his dear friend, David Beisel, who was injured during last week’s competition. “Vincent has been second place in the WEC Grand Prix twice now. Both times Mr. Beisel was ahead of us. We are all devastated to not have David here with us and we miss him greatly. We can’t wait to have him back riding at WEC.”

Skylar Wireman claimed the next two placings aboard her stunning rides. She and Coolio 23 (Contendro I x Saphhira), a fifteen-year-old Oldenburg gelding dashed to second place, securing times of 80.197 seconds in round one and 41.810 seconds in the jump-off to take home red ribbon honors.

She hung the third place ribbon on King’s Ruby (Che Guevara van Paemel Z x Landfriese I). Wireman and the twelve-year-old Belgian Warmblood went clear in the first round, stopping the timers in only 79.734. They later returned to the jump-off, but caught an unlucky for a 4-fault 39.490-second finish.

Richard Rinehart of Rinehart Farms and his own Captain America (Contendro) went double clear during this afternoon’s $10,000 Futures Prix 1.30m. He and the 2014 gelding had blue on their mind as they confidently contested the challenging course and were the sole pair to go double clear.

We stopped to talk about Rinehart’s winning round. “He was excited when we started, but he settled in quickly and jumped super for me. The course was evidently harder than it walked. Captain went on to be the only one to jump clean. I took extra time to do the black and white jumps at the end of the course and that to me was the biggest question out there.”

Rinehart and the scopey warmblood gelding went clear in round one, directly advancing them to the jump-off. They were careful around the tracks, being sure to go clear and securing a final time of 35.156 seconds to earn team Rinehart the top prize.

Ian Roberts and Copper Cover (Douglas x Hyundai Santa Fe) blazed the first round course with a finishing time of 72.518 seconds. Roberts and the 2006 Irish Sport Horse gelding yielded an unfortunate rail penalty, but their fast efforts landed them a second-place finish.

Rounding out the top three placings were Ashley Stumm and her own Ismael (Numero Uno). Junior rider Stumm and the nine-year-old bay gelding also knocked a rail but managed a fast time of 74.232 seconds for third place.