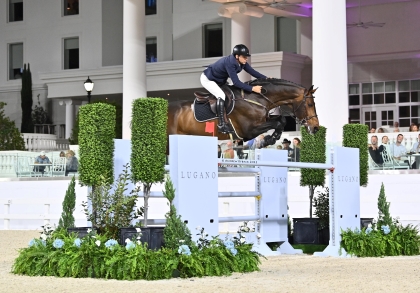 Lambre and his first mount, Cetano Van Aspergem Z (Altamira Z x Clinton) were the third pair down the ramp into the WEC Grand Arena, earning the first clean ride of the night in 74.186 seconds. Sharn Wordley and Fernando Cardenas Jr.’s Quincy Too were the next pair to produce a faultless first round in 74.367 seconds.

Lambre the Chacco Blue II were the sixth to last pair to try their hand at Wade’s first course, producing a second clear round in 75.639 seconds, just within the time allowed of 76 seconds.

Lambre spoke about today’s challenging tracks, “This was the biggest grand prix yet, and most technical. It was perfect training for next week’s grand prix. The course designer did an amazing job, making the first course tough enough with a tight time allowed. There were quite a few that had a time fault.”

Lambre and Cetano Van Aspergem Z were the first pair to return for the jump-off, “I tried to be fast on Centano Van Aspergem Z because I knew I still had one left,” said Lambre. Lambre and the 13-year-old Zangershiede gelding yielded a very fast jump-off in 39.597 seconds, with an unfortunate rail down at the last fence.

Sharn Wordley (NZL) and Quincy Too (Quartz Adelheid Z x Pixie Des Hayettes) followed Lambre in the jump-off, opting to take a more conservative route to ensure that all jumps stayed up. Wordley and the 13-year-old Zangersheide gelding galloped through the timers to stop the jump-off clock at 43.310 seconds, earning second place. Wordley also secured fourth place on his own Casper after leaving all rails up in the first round, but incurring one time penalty.

Lambre and Chacco Blue II were the final pair to return for the jump-off, “Sharn was smart to stay more conservative to leave the rails up. Chacco Blue II isn’t a very fast horse, but I tried to go quick in the beginning so I could steady toward the end. He’s blind in his left eye, so I can’t make tight left turns, but I was able to stay out after the Coca-Cola jump to slice the chapel fence very nicely.”

Lambre and the 15-year-old Oldenburg stallion flew through the timers in 41.153 seconds with all rails up to earn the top prize.

Aaron Vale and Thinks Like A Horse & Alise Carrico’s Cristo Beech received the fastest four-faulter award in the $75,000 Lugano Diamonds Grand Prix, delivering a time of 72.328 seconds in the first round with one down.

Christopher Underhill received the $5,000 ‘Luck of the Draw’ award.