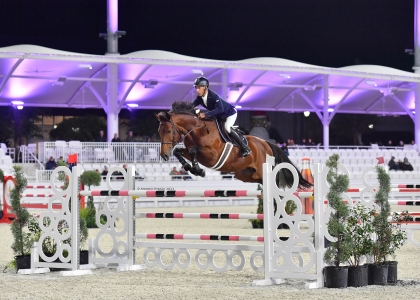 Ocala, FL – The $15,000 Buckeye Nutrition Futures Prix returned under the lights in the WEC Grand Arena for the second week of the 2022 USEF Fall Show Series at World Equestrian Center – Ocala. The Futures Prix showcases developing horses and riders that are in progress of moving up to the higher levels of competition and to help gain experience, the class was held in a higher-level atmosphere. Thirty-six athletes took to the WEC Grand Arena last night to compete for the lion’s share of the prize money, but it was Richard Spooner (USA) and Molly Ohrstrom’s young six-year-old Argentinian Sport Horse stallion Halcon that posted an uncatchable time.

FEI Level III course designer Peter Grant (CAN) built the convivial tracks that allowed fourteen horse-and-riders combinations to advance to the jump-off. Half of the 14 jump-off contenders managed to produce a double clear effort.

Richard Spooner and Halcon entered the class toward the middle of the order, navigating a seamless first round in 75.874 seconds, well under the time allowed of 84 seconds.

Spooner spoke about the talented young stallion, “Halcon is a six turning seven-year-old owned by Molly Ohrstrom. We purchased him in Argentina as a five-year-old and he’s amazing. This is the biggest class he’s ever done, but he went out there like a lion. He’s for sure, if not, the best young horse I’ve ever had,” stated Spooner. “He feels like he’s reincarnated from his sire Con Air, who I competed against in the past. José María Larocca rode Con Air, while I was riding Cristallo in the Global Tours, so I am moderately familiar with the horse and the way he goes.”

“Halcon feels like he’s already done the sport. When I decided to make the tight inside turn to the World Equestrian Center vertical, he just rolled back and made it seem like it wasn’t a bit deal. I never practice turns like that and for a young horse to be able to navigate such a tight turn and do it so relaxed is very rare.”

Spooner and Halcon advanced straight to the jump-off, “I was focused on the exploration. I jumped the first fence on a bit of an angle, then I went in-between the two jumps, so the second oxer in the jump-off didn’t show itself until two or three stride out. With a young horse every time you ask them a question and they studder, you back-off the next question, but Halcon didn’t stutter. I asked him a little harder of a question two jumps later to jump four. I jumped the fence on an angle, but the angle put the horse in view of another jump that wasn’t in the jump-off – that’s a hard test for a young horse. Then I asked him to bend back to the double combination, that was originally a straight line, and I added a step in because the angle put me out to the right. He was so confident, I put even more pressure on him with the roll back, then I let him open up to the last fence to see how much gas he had in the tank, and I don’t think we even tapped into what that horse is capable of.”

The pair flew through the timers in 39.367 seconds to secure the victory.

Spooner appreciates World Equestrian Center – Ocala for holding the Futures Prix under the lights, “This facility has been extraordinary for Halcon, because he can compete in so many different arenas with so many different jumps that are so beautiful and decorated. Having the opportunity to compete in an atmosphere like this is truly amazing for a developing horse. Lights tend to be a dilemma for horses because when they’re in the growth stage they never are able to have the opportunity of showing under quality lights, until they are showing in the 1.60m. At that point you’re just throwing the horse in battle and hoping they succeed. To be able to show 1.40m in the same environment is a tremendous opportunity and learning tool. It was a fantastic simulation on what’s to come.”