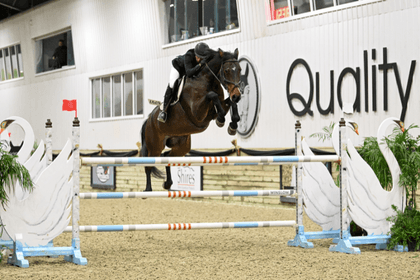 Wilmington, OH – Competition at World Equestrian Center – Wilmington reached its pinnacle Saturday, November 19 as the Sanctuary Arena hosted the second $30,000 WEC Grand Prix of the Midwest Indoors Series. Eager spectators crowded the stands to watch as 20 elite horse-and-athlete combinations rose to the challenge. Michael Burnett and Chagrand delivered an electric performance, dominating the class to stand atop the podium to claim the win.

Keith Bollotte (USA) set a 12-obstacle first-round track for the field of athletes. A triple combination, two quick verticals out of the turn, and multiple bending line elements asked the horse-and-athlete pairs to think quickly and carefully in order to jump a clear round. Only eight combinations posted a fault-free first round to qualify for the jump-off. The second phase of competition included eight elements, where riders had three opportunities for inside turns and a long run to the final fence.

Rinehart and Ron Caraway’s Vincent were the second duo to jump-off. Rinehart, familiar with the winner’s circle at World Equestrian Center – Wilmington, set a quick pace for the rest of the field. Their time was quickly challenged by the leading pair.

No one could catch Burnett and his very own Chagrand. Burnett piloted his horse to a powerful first round, answering the technical questions asked of them with ease.

Burnett of Burnett Farms in Lebanon, Indiana, was also the winner of Thursday night’s $10,000 WEC Welcome Stake. Looking to best Richard Rinehart’s time, Burnett put the trust in his horse and crossed through the timers in a lightning-fast time of 36.393 seconds.

“I just went for it in the jump-off,” comments Burnett. “I did the six instead of the seven to the one-stride, which no one else did in the jump-off. I felt like I really had to slow him down for the seven in the first round and I felt like he was very careful today, so I was not worried about him having the rail in the combination.”

“Charlie [Chagrand] is a 13-year-old by Chacco Blue. He is my most special horse. I have a lot of amazing ones in the barn that will do these classes at some point, but he is my top horse at the moment.”

Izzy Beisel, riding out of her family-owned farm David Beisel Stables, entered the Sanctuary looking to give Burnett a run for his money aboard Vegas H. Beisel, the youngest rider in the field, was fearless atop her seasoned mount. The duo galloped in the long bending line, posting a quick pace but causing her to add one more stride in the turn, leaving her just behind the winning time. Beisel galloped through the timers in 38.202 seconds to add another impressive podium finish to her growing record.

Rinehart came into the highly anticipated class with great confidence after a respective third place in Thursday night’s $10,000 WEC Welcome Stake and a win in last week’s $30,000 WEC Grand Prix. Using his knowledge to his advantage, he made each inside turn available and left a stride out, crossing through the timers in 38.329 seconds, ultimately finishing with the yellow ribbon.

The $10,000 WEC – Wilmington Futures Prix saw a field of seasoned athletes, and many new promising partnerships. A total of 21 horse-and-athlete pairs competed over Ballotte’s challenging track. Ten riders qualified for the jump-off phase, where they immediately participated in a short course to ride for the prize. Ultimately, it was Roman Mezger and Utopia Investments LLC Viarado who were unbeatable.

Mezger of Lexington, Kentucky, and the 10-year-old Hanoverian gelding were the fourteenth pair to try their hand at Ballotte’s winding track, set to challenge athletes’ adjustability with a multitude of bending lines. Viarado was incredibly quick across the ground and kept in careful form to navigate an easy clear first round, moving right into the jump-off phase.

Mezger made every inside turn that the track had to offer and picked up an immediate gallop to the last fence. Posting a fault-free effort in a blazing fast time of 34.413 seconds, the duo moved directly into the lead and remained uncatchable for the rest of the class.

Allison Orth of Lincolnshire, Illinois and her own Chabada D’ysieux Z went home with the red ribbon, also jumping a double-clear effort. The 10-year-old Zangersheide mare jumped a textbook effort in the first round, qualifying them for the short course. The duo executed the technicalities of the track flawlessly; however, they were not quite quick enough to catch the leader. Orth galloped through the timers in 35.002 seconds to secure the second-place position.

Lani Hutchison of Galena, Ohio rounded out the podium aboard her own Iconic. Piloting the nine-year-old KWPN gelding to a confident ride in the first round, Hutchison was able to secure a piece of the prize money moving into the jump-off. The duo crossed the timers in just 37.668 seconds, ultimately securing the yellow ribbon.